The (False) Seduction of Cities 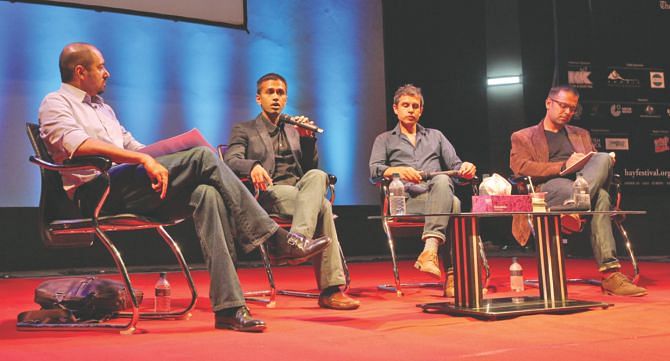 The irony of going to attend a Hay Festival session on globalisation, capital, and the brutality of an ubran landscape shaped by neo-liberal ideas of capitalism was not lost on me. With the recent case of three outsiders brutally assaulted on dubious grounds not far from the Hay Festival location of Bangla Academy, the issues touched upon at the session struck a chord with the Bengali audience.

Dasgupta, who lived in Delhi for over a decade starting in the early 2000s, talked about how he saw immense hope in Delhi-ites about the future, spurred on by roaring economic growth in the late 90s. He soon realised, however, that the promise of growth and development was a false one and that neoliberal capitalism brought with it new and varied forms of inequality and injustice.  His book, "Capital", a non-fiction work, explores the crashing of hopes and dreams of the urban populace in Delhi in an increasingly neoliberal India. His book, he stated, was as much about Delhi as it was about neoliberal capitalism. He didn't want it to be a work of fiction, because the complex reality of lives of a diverse modern populace struggling to survive in a cut-throat capitalist world was more interesting than anything he could have imagined himself. He mentioned that capital(ism) is not universal, but rather something that manifests itself in different ways in different localities, taking on a particular shape of its own.

As the talk progressed, the focus shifted to the cruelty and abuse of power that is frequently observed in these cities. Somnath discussed the incredible power the media holds, and how it is a tool for the rich and powerful to shape the thinking and aspirations of urban citizens. The incredible pull of the city on the people outside of this city, he said, legitimises the desire of migrants who want to be a part of the power structure.

Kazi Anis then directed the talk towards the reason for the political and social strifes in sub-continental mega cities. Javed Jahangir observed that the three nations of the subcontinent are still suffering from the trauma of partition. The partition of 1947 and independence war of 1971 left a pshycological scar on the people, which resulted in an overcompensated sense of masculinity, patriotism, and partisanship, the writers opined.

The discussants highlighted how, under neoliberal capitalism, the freedom of capital is prioritised at the expense of the freedom of the people. When it came to solutions, though, the panelists voiced a unified concern: as long as people view the solution to be driven by capital, it will only lead to a more disjointed society. Everyone agreed that cities like Dhaka and Delhi, with their unique blend of overpopulated streets, shadow economies, and a frustrated, segregated middle class are templates for the cities of the future. Why? Because people still survive, and they throng to the already crowded streets with hope and a desire to survive.

An interesting question emerged towards the end of the discussion: are we focusing too much on the urban landscape in the literature of the region? While Rana and Javed said they were mostly fascinated with the urban dynamics of most regions, Somnath declared that his publisher is worried about his upcoming work as it revolves around a small town.

It was a fascinating talk, encapsulated by the buzz of a Hay Festival drawing in people from all walks of life. It's just getting started, and it's off with a bang.