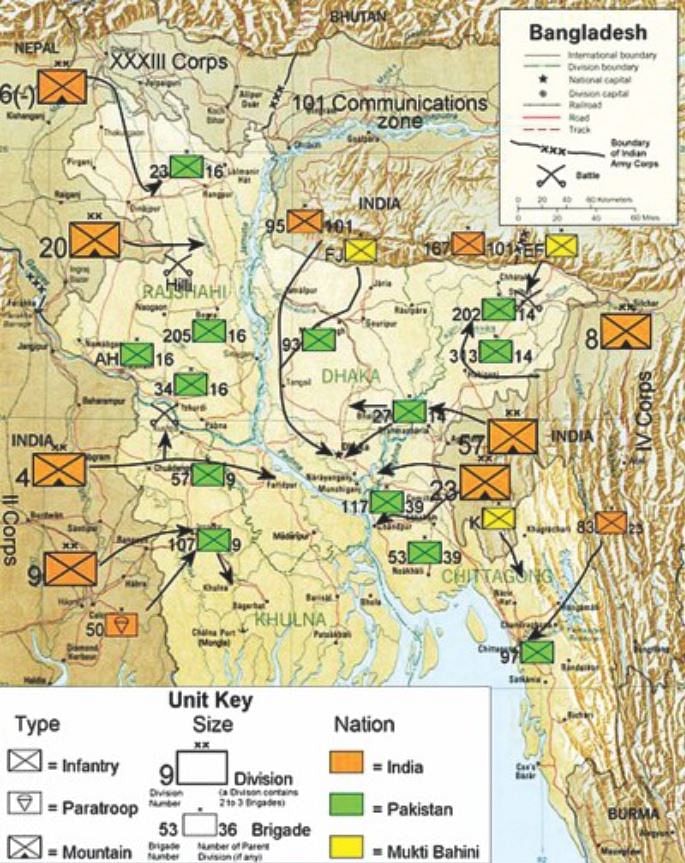 At can be the subject of a lively debate. It can also be a vain attempt to change the course of history too. Still this writer asks 'what would have happened if the Pakistani air force hadn't struck the Indian airfields located in the north west of India on 3 December 1971′? or 'If the Pak-military machine was truly prepared for a full scale war on its eastern theatre?' The simple answer is that war for our liberation would have lengthened. But the war ending within a couple of weeks with india's involvement, helping in liberating Bangladesh and defeating the Pakistanis was one of the swiftest military campaigns of recent times.
The man who forced Pakistan to surrender in the 1971 Bangladesh War has passed away. Lt Jagjit Singh Aurora, General Officer Commanding (GOC), Eastern Command led the Indian forces and forced Pakistan's Eastern Command, to surrender just within two weeks of the war starting. It should be noted that the attack led by Aurora wasn't a one that took the Pakistanis completely by surprise. It wasn't the military supremacy of the Indians only, but rather the successful coordination of a number of factors that enabled the campaign to be so rapid. First the campaign was led under a joint command that was very well coordinated, second, a spree of Guerrilla assaults led by the Muktibahini that weakened the strength and morale of the enemy, and third, cutting off the enemy supply lines with effective intelligence reports.
The final battle had actually begun at around 5.40 pm, 3 December, 1971as the Pakistan Air Force (PAF) led coordinated air strikes against nine Indian airfields in the Western sector. The air strikes were followed by a massive attack on the strategic Chhamb sector in the north while the Indian Army went on the offensive in the East. As a response to the attack, both India and Pakistan formally acknowledged the "existence of a state of war between the two countries", but interestingly enough neither government had formally issued a Declaration of War. Thus, the final battle for the liberation of Bangladesh had begun.  The strategy: three-pronged assault of nine infantry divisions with attached armoured units and close air support units rapidly converged on Dhaka.
Lieutenant General Jagjit Singh Aurora, who commanded the eighth, twenty-third, and fifty-seventh divisions, led the Indian thrust into East Pakistan. As these forces attacked Pakistani formations, the Indian Air Force rapidly destroyed the small air contingent in East Pakistan and put the Dhaka airfield out of commission. In the meantime, the Indian Navy effectively blockaded the maritime boundaries of East Pakistan.
The Indian campaign had some of the traits of the famous German "blitzkrieg" –"Lightning war" techniques, exploiting the weaknesses in the enemy's positions while bypassing the enemy, and resulted in a swift victory.
The Indian Air force also hit back with retaliatory strikes. The PAF's handful of Sabres at Tejgaon near Dhaka in East Pakistan did manage to put up a useful resistance against all-out attacks by Indian fighters ,but a change in strategy through night-time bombing with over 4000 sorties flown by the Indians the 'Mitro bahini'(Indo-Bangla forces) by now was wreaking havoc over the Pakistanis. The embryonic Bangladeshi Air Force, with three DHC Otters (fitted with machine guns) of Mukti Bahini Air Wing, made a bold appearance on 7 December. With the PAF in the east effectively neutralized, the IAF concentrated more on supporting their advancing army. Movements of Pakistani troops during daytime came to a virtual halt due to relentless IAF air attacks. Ferries across major river crossings were blown up from the air too.
The Pakistan navy, since its inception declined to provide substantial naval contingents for the defense of its eastern wing, for two reasons. First, they had an inadequate number of ships to challenge the Indian navy on both fronts. Second, the PAF in the east was not deemed strong enough to protect the ships from Indian airpower (i.e. both the IAF and the Indian Navy air arm). The fate of Pakistani naval vessels in December was ample proof of the soundness of this decision, and the repercussions of neglecting East Pakistan defense infrastructure, which was the reason the PAF could only station 1 squadron of planes there. Pakistan Eastern Command had planned to fight the war without the Navy, and faced with a hopeless task against overwhelming odds, the Navy planned to remain in port when war broke out.
Looking back at the liberation war's final thrust is a fascinating one. The pace of the attack was fast but it, however, did not have all the aspects of "Blitzkrieg". With scattered and limited air attacks, and no Sea battles the final battle for Bangladesh can hardly be ascribed as an all out war. In light of the three specified causes for victory stated earlier another factor also evident: the first and likely the most important was the total air supremacy that the IAF gained in the opening days of the war.
In light of the HAMOOD UR REHMAN COMMISSION REPORT's last survived copy that came out a few years ago, it was interesting to follow some of the aspects behind the defeat of such an organized force, namely – the degenerated moral aspects of Pak officers, alleged atrocities, and the professional responsibilities of certain officers during the time of the war.
With some 93,000 strong the Pak military could have put up with a strong resistance and many reasons beyond the Rehman report in the army's sudden crumbling are speculated till this day. Although the western theatre saw engagements that helped define the rules of 20th century warfare, but the short but intense battles between the joint Indo-Bangla forces and the Pakistani Army lasted barely 14 days, between 3 December and 16 December 1971 through the emergence of the people's republic of Bangladesh.

This article was previously published in December 16, 2013