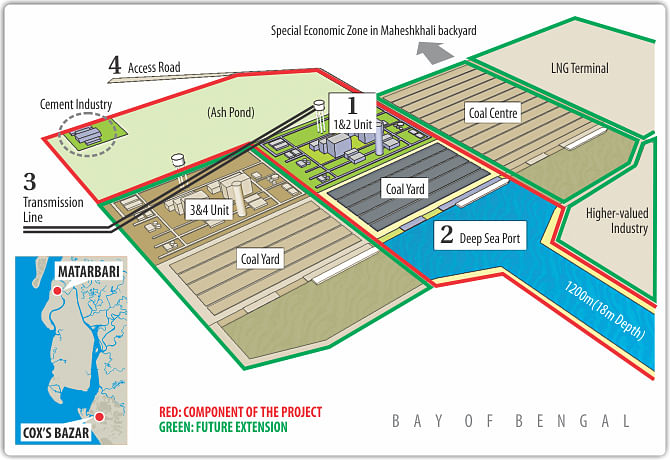 The government yesterday approved the country's biggest ever investment project of $4.5 billion to set up a coal-fired power plant on Matarbari island near Maheshkhali.

The 1,200-megawatt power project is by far the costliest of its kind in the world, according to experts.

While around $3 billion will be spent on the construction of the plant, the remaining funds will be needed for setting up a deep-sea terminal to facilitate import of coal; developing local infrastructure and township; installing a high voltage power line; and land resettlement, etc. 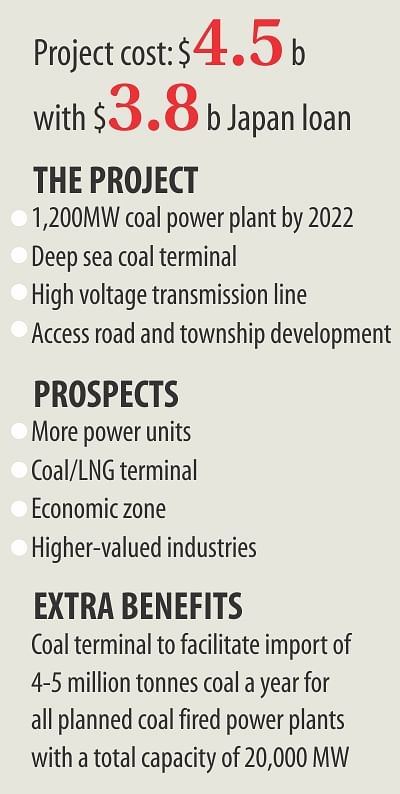 “The Ecnec today (yesterday) approved the single biggest project in the history of Bangladesh which includes a deep-sea port 30 feet above sea level,” Planning Minister AHM Mustafa Kamal told reporters after a meeting of the Executive Committee of the National Economic Council (Ecnec) at the NEC auditorium.

Though it will take till 2023 for full installation of the power plant, the planning minister hoped the plant would be able to start generating 600MW electricity by 2018.

Power from this plant is projected to cost nearly Tk 7 per kilowatt-hour when it begins commercial production in 2023. The cost is considered high in the present context.

Mustafa Kamal said it would be a comprehensive project with two units, each having 600MW generation capacity, and a township will be built with residential and non-residential facilities.

The minister said a buffer zone would be built in the deep-sea port for keeping imported coal. After meeting the demand of the Matarbari power plant, the remaining coal will be supplied to other coal-based plants.

Fifty percent of the country's total electricity would come from coal-fired plants by 2030, he said.

Besides this one, the government is planning to set up more coal-fired plants in Maheshkhali with a view to producing additional 8,000MW electricity.

About the high cost of the project, the document said it was so due to the inclusion of various components. The power plant will use ultra-supercritical technology equipment that increases the cost significantly.

The use of this technology, according to a press release of the planning ministry, will reduce carbon emission.

The cost of electricity generated from this power plant will be higher than that from other plants, the project document states.

Mustafa Kamal touted the Matarbari project as the most environment-friendly coal-fired plant in the world, with a 41.3 percent thermal efficiency. The efficiency of such power plants in other countries is between 29 and 40 percent.

The Matarbari project cost is strikingly higher than the Indo-Bangla joint venture 1,320MW Rampal coal-based power plant that would require at least $1.5 billion for construction.

However, unlike the Rampal project, it has included costs for other facilities: a port for large ships with 80,000-tonne capacity, a high voltage 400kV transmission line from Maheshkhali to Anwara of Chittagong, construction of a road and two bridges from Chakoria to the project side.

The project, the first venture of the newly formed Coal Power Generation Company of Bangladesh, will be built on 1500 acres of land, keeping in mind future expansion. The cost of this land is estimated at Tk 350 crore.