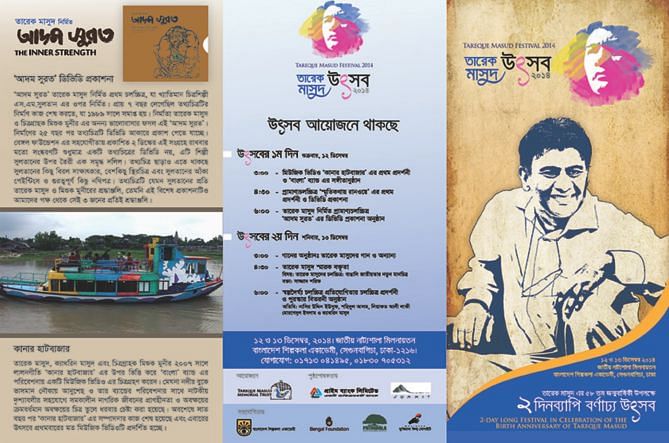 The second edition of the two-day Tareque Masud Festival begins at 3pm today at the Bangladesh Shilpakala Academy (BSA) in the capital. The Tareque Masud Memorial Trust will organise the festival to commemorate the birthday of the late filmmaker. A series of special events that share a common connection to the works and dreams of Tareque, will be held as part of the programme.

About this year's festival, his wife filmmaker Catherine Masud said, “We are bringing in musical performances this year. The festival will open with a performance by the band Bangla. The group has disbanded but they have come together for this performance. And they will be singing several Tareque songs along with Lalon numbers, Rabindranath's songs and one Nazrul Sangeet.  It will be very exciting to have them performing on stage together. We will be closing that part with a screening of a music video of Bangla singing Lalon's 'Kanar Haat Bazaar'. We have just finished the music video which was shot many years ago. Also joining them on stage will be Tanveer Alam Swajeeb and Seth Pandu Blumberg. The second day will have a Boyati performance and one by Tanveer Alam Swajeeb. The musical performances will add a different dimension of Tareque's works; he was an excellent songwriter, and most of the songs in our films were written by him.”

“Another event will be the second edition of Tareque Masud Young Filmmakers' Award. Filmmakers between the ages of 16 to 25 have participated in the programme and the award will be given to three films. This year's theme was 'Amar Mukti, Amar Juddho',” she added.

Catherine went on to add, “We are also launching the DVD of 'Adam Surat', which is the first film of Tareque and was shot 25 years ago. It took a long time to re-master the film digitally. It also packs all of the other extras including Tareque's own interview about his journey with SM Sultan. We are calling this package an archive because it has lot of materials which we have collected over the years. A lot of writings by Tareque on SM Sultan and by other famous personalities like Professor Razzaque, Shawkat Osman, Ahmed Sofa and Shamsur Rahman are in the DVD. It comes with a 150-page booklet that contains all the writings and information about. There are two DVDs; one DVD contains the film and other DVD packs extra materials.”

The festival will also see the premiere of Tareque's documentary “Remembering Runway”. The 40-minute film, directed by Catherine Masud and Dina Hossain, is a behind-the-scenes account of the making of film “Runway” and is a tribute to the filmmaking partnership of Tareque Masud and Mishuk Munier. Poet and writer Sajjad Sharif will present the Tareque Masud memorial lecture, “Cinema of Tareque Masud: A New Map of Bengali Nationalism” on the second day.