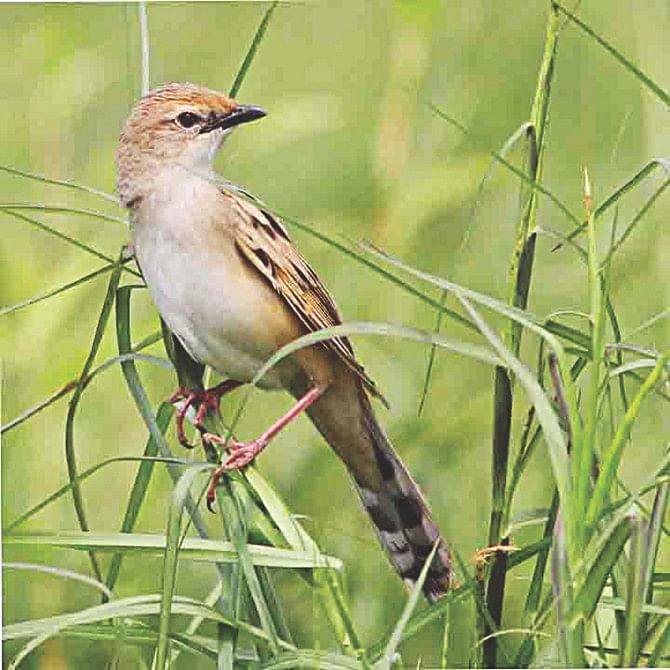 The grassbird is a medium-sized, brown bird that lives among tall grass and reeds. The Encyclopedia of Flora and Fauna of Bangladesh lists three grassbirds. The Striated Grassbird is the most common – I have seen it numerous times in fields. The Bristled Grassbird – a bird that can be found only in the Indian Subcontinent – is considered a “former resident” of Bangladesh. That's because the last time someone recorded seeing it here was 135 years ago. The third grassbird, Rufous-rumped Grassbird, is a “rare” resident of Bangladesh, and presumably can be found if you search hard enough.

It was with the hope of finding this Rufous-rumped Grassbird that eminent birder Enam Ul Haque, along with birder Onu Tareq, set out for Tanguar Haor last summmer. They thought that this shy, skulking bird, which might be living among the reeds in the Haor, would show itself in April during the breeding season. In order to attract a mate, male grassbirds typically shoot out of their nests (in tall grass or reed) and make circles high overhead while singing loudly.

The very afternoon they reached their destination in the northern part of the Haor, Enam noticed a grassbird making circles overhead. It was neither the easily-identified Striated Grassbird, nor did it have the colours of the Rufous-rumped Grassbird. Enam was intrigued. Due to the arduous nature of the travel, the pair was carrying bare minimum gear. They had several mist nets used for catching birds (for ringing), but not the hardware to mount them. Improvising, they borrowed poles from local boatmen and set up several nets early the next morning.

By eight A.M., they had caught the first bird. Five others were caught later. Since it was a hot day, they released the birds soon after taking some pictures to identify them. Indeed, they were grassbirds, but not the Rufous-rumped or Striated kind.

It was the strong bristles (like moustaches) growing under their eyes that gave them away. The pair had stumbled into the Bristled Grassbird, a species thought to have been extirpated from Bangladesh! The six Bristled Grassbirds - one female and five males – were ringed, photographed and released. They were the first of this species recorded in our country since being reported in Stray Feathers, a birding journal published by J. R. Cripps in the 1870s. Experts had, mistakenly, thought that the Bristled Grassbird had disappeared from Bangladesh.

However, the Bristled Grassbird is a “Globally Vulnerable” bird. Its number worldwide keeps dwindling because of reduction in its habitat: harvesting of grass and reeds and conversion of grasslands into agricultural land.

This discovery illustrates why Tanguar Haor is so special. Located in the north-western part of Sunamganj district, this wetland is recognized internationally – for its biodiversity - as a Ramsar site. While the Haor is normally leased out for fishing every year, recent efforts at co-management of the fishing resources through the fishermen from 88 neighbouring villages will undoubtedly improve conservation efforts there. Who knows what other mysteries it holds?