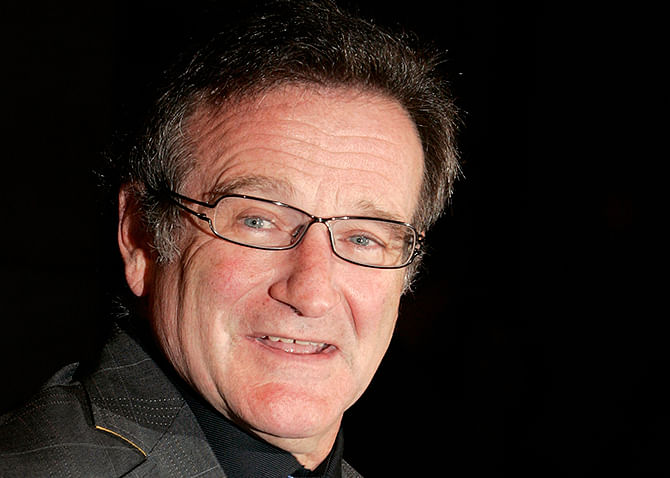 Actor Robin Williams arrives to attend the 2006 New York Film Critics Circle Awards in New York in this January 7, 2007 file photo. Williams was found dead on August 11, 2014 at his home in Northern California from an apparent suicide, Marin County Sheriff's Office said. He was 63. Photo: Reuters

Oscar-winning actor and comedian Robin Williams was found dead at age 63 on Monday from an apparent suicide at his home in Northern California, authorities said.

Hollywood celebrities and many others who knew him paid tribute to Williams:

His wife Susan Schneider said in a statement: "This morning, I lost my husband and my best friend, while the world lost one of its most beloved artists and beautiful human beings. I am utterly heartbroken."

President Barack Obama, in a statement making reference to the actor's many roles said: "Robin Williams was an airman, a doctor, a genie, a nanny, a president, a professor, a bangarang Peter Pan and everything in between. But he was one of a kind. ... The Obama family offers our condolences to Robin's family, his friends and everyone who found their voice and their verse thanks to Robin Williams."

Director Steven Spielberg said in a statement: "Robin was a lightning storm of comic genius and our laughter was the thunder that sustained him. He was a pal, and I can't believe he's gone."

Comedian Steve Martin said on Twitter: "I could not be more stunned by the loss of Robin Williams, mensch, great talent, acting partner, genuine soul."

Actor Ben Stiller said on Twitter: "I met him when I was 13 and a huge fan and he was so kind and I watched him be kind to every fan I ever saw him with ... And with other actors he was so generous and brilliant. He made everyone feel special and equal around him even though he was the genius."

I can’t believe the news about Robin Williams. He gave so much to so many people. I’m heartbroken.

Comedian Chevy Chase said in a statement: "Robin and I were great friends, suffering from the same little-known disease: depression. I never could have expected this ending to his life, and to ours with him. God bless him and God bless us all for his LIFE! I cannot believe this."

Producer David E. Kelley, who created television show "The Crazy Ones" starring Williams, said in a statement: "The talent was legendary. But equally inspiring, perhaps more so, was his kindness and humanity. Gentle soul who touched us all."

I once asked Robin Williams to offer advice for my son, who would soon turn 18. "Follow your heart," he said. "The head is sometimes wrong."

Officials from Twentieth Century Fox Television, the studio that produced "The Crazy Ones," said in a statement: "Robin Williams was a comedy giant, and although we only knew him personally for a season, he was warm, funny and a true professional."

Actor Neil Patrick Harris said on Twitter: "I am stunned and just reeling from the news of Robin Williams' death. He brought so much joy and heart to millions ... Just, wow."

Actor John Travolta said in a statement: "I've never known a sweeter, brighter, more considerate person than Robin ... Robin's commitment as an artist to lifting our mood and making us happy is compared to none."

Actress Sally Field said in a statement: "I feel stunned and so sad about Robin. I'm sad for the world of comedy. And so very sad for his family. And I'm sad for Robin. He always lit up when he was able to make people laugh, and he made them laugh his whole life long ... tirelessly."

Lucy Mercer, executive artistic director at the Throckmorton Theatre, a small nonprofit center near his home in Marin County, California, where the actor was known to try out new material, said in a statement: "He embodied what it meant to be humble. He doused us in his love and positive glow and never asked for anything in return."

Actress Minnie Driver said on Twitter: "My Heart's broken. Robin was a beautiful, kind soul. Can't bear that he's gone. So incredibly sorry for his family."

Comedian Ellen DeGeneres said on Twitter: "I can't believe the news about Robin Williams. He gave so much to so many people. I'm heartbroken."

Actor Kevin Spacey said on Twitter: "Robin Williams made the world laugh & think. I will remember & honor that. A great man, artist and friend. I will miss him beyond measure."

Writer and actress Lena Dunham said on Twitter: "Just shared a moment of silence on the set for Robin Williams, a man who brought so much laughter, joy and healing to so many."

Comedian Margaret Cho said on Twitter: "I AM BEYOND DEVASTATED."

Comedian Jimmy Kimmel said on Twitter: "Robin was as sweet a man as he was funny. If you're sad, please tell someone."