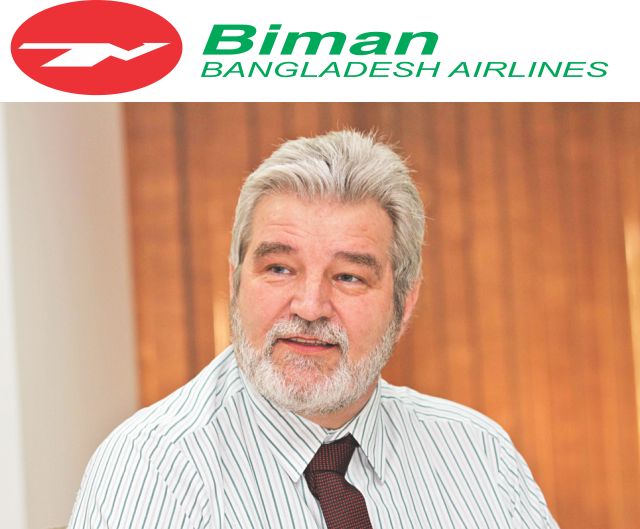 If you have flown Biman of late, you are likely to notice a few things. Your flight, most probably, had departed on time. The on-flight service was better. And you might have a surprise welcome on arrival at Dhaka by the top Biman man.
Biman, in the last one month, seems to be trying to fly straight from the rudderless flight that had pushed the national airlines in the red.
It has got a new managing director, the first foreign chief executive Kevin John Steele, who has been trying all the tricks to change Biman.
First, Kevin is trying to make planes take off on time. The success is quite high, considering he has been in charge for less than a month.
In one week in April, 2012, on-time flight departure was only 27 percent. In the last week beginning April 14, 41 percent flights departed on time.
“This is a bit of an improvement, but this is still nothing like acceptable, nothing like major airlines, so I want to get this over 80 percent before the end of this year,” Kevin says. “One big thing is the average delay has dropped a lot more. Last year, with no standby aircraft, we had some delays of over 12 hours.”
Kevin has gone for simple solutions to bring about this improvement. He has kept the old DC-10 aircraft standby. In case any aircraft develops technical glitch, the DC-10 rushes to lift passengers.
A lot of delays occur because of passenger handling at the immigration and check-in.
So, Biman has worked back a schedule from the time departure and is sticking to it. It is arranging quicker passing of passengers on priority basis.
Biman has given measurable targets to all staff, which includes punctuality.
“This has improved services but it is not good enough. I want British Airways results,” says Kevin, who once served as General Manager of British Airways.
Kevin's biggest challenge and Biman's, however, is bringing the airlines from the red to the black. Last year, it suffered a loss of $75 million.
Kevin has identified about 20 steps, some of them quite simple, to save cost.
For example, one step is to cut the number of passengers on waiting list.
Biman used to allow up to 50 passengers on waiting list. But to book each ticket, the airlines has to pay $7 to a company for using its “global distribution system” (GDS).
What Kevin did is cutting the waiting list from 50 to 15 passengers. Thus Biman can save $245 on GDS charge every flight. For the whole year, it means saving $1.5 million a year.
Another simple step is to save on fuel.
In winter, weather over Dhaka and Chittagong often remains foggy. This is why each flight has to carry extra fuel so that it could divert to Yangon in case of poor visibility.
For this every flight had to carry excess fuel weighing 1,000kg. This extra fuel costs money. Moreover, to carry this 1,000kg extra load, each flight has to burn about 200kg equivalent of fuel.
So Kevin has equipped the Sylhet airport with fuel trucks so that aircraft can land in Sylhet instead of Yangon in case of foggy weather.
This would save another $2 million a year.
Kevin has also planned a revenue management system. This would help give priority to passengers on priority routes.
For example, fare from Kuala Lumpur to Jeddah is $900 while from Dhaka to Jeddah it is $850. So flying passengers from Kuala Lumpur to Jeddah is not profitable.
When the new revenue management system will be in place, Dhaka-Jeddah passengers will get priority. Biman can save $20 million from this.
Fuel efficient aircraft is a key to cutting cost. Biman will float tenders for two Boeing 777s in August to take a lease on them for five years.
Kevin said Biman has Boeing 777s, 737-800s and Airbus A310s but the Airbus is fuel inefficient and he would phase them out in two years.
“We have eight aircraft now. I am looking at 16 in two years,” Kevin adds.
Biman will also introduce e-customers' feedback and rating of services. Staff who can surpass their targets will get extra bonuses.
“I am looking at Biman not from domestic perspective but from international viewpoint,” Kevin says. “In one year, Biman will do 95 percent of what British Airways or Etihad has been doing.”
The end point -- “Biman is looking at $70 million in savings and a comeback to black.