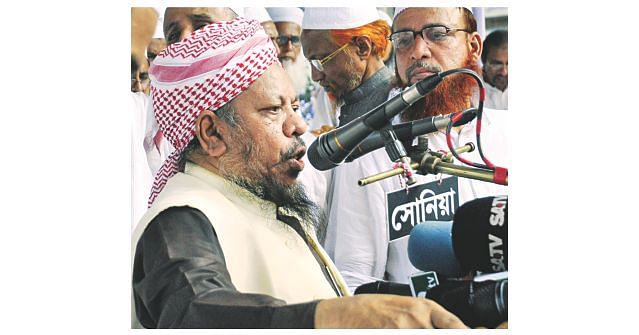 One of the key organisers of Hefajat-e Islam's Dhaka long march and the subsequent rally was Maulana Habibur Rahman, a madrasa principal of Sylhet with the background of working for “Taliban-style” rule in Bangladesh.
Habibur was a speaker at yesterday's post-long-march rally of Hefajat. He was also sitting in the forefront along with top leaders during Hefajat's Thursday's press conference at Lalbagh Madrasa in the capital.
Habibur, principal of Kazi Bazar Madrasa in Sylhet city, also ameer (chief) of Bangladesh Khelafat Majlish and known as Bubuli Huzur in Sylhet, was a leader of the banned Islamist militant organisation Harkat-ul Jihad al-Islami (Huji) Bangladesh and has links with international militant groups.
Habibur himself revealed the link in an interview with a bulletin titled "Islami Biplob" (Islamic revolution), published on August 20, 1998, in Sylhet with the express purpose of celebrating "the total victory of Talibans and establishment of an Islamic state in Afghanistan".
The Huji Bangladesh top brass include Shaikhul Hadith Allama Azizul Haq (who passed away in August 2012), who was also chief of a faction of Islami Oikya Jote, a former partner of the BNP-led alliance; Bangladesh Khelafat Majlish second-in-command (now chief) Muhammad Habibur Rahman of Sylhet; Ataur Rahman Khan of Kishoreganj; Sultan Jaok of Chittagong; Abdul Mannan of Faridpur; and Habibullah of Noakhali.
All of them were involved in different Islamic organisations and madrasas. Ataur Rahman Khan was elected MP on a BNP ticket in 1991 from Kishoreganj-3 constituency.
In an interview several years ago, Habibur disclosed the names of people with whom he had travelled to Afghanistan via Pakistan in 1988, visited some Taliban militant camps and also met al-Qaeda leader Osama bin Laden. 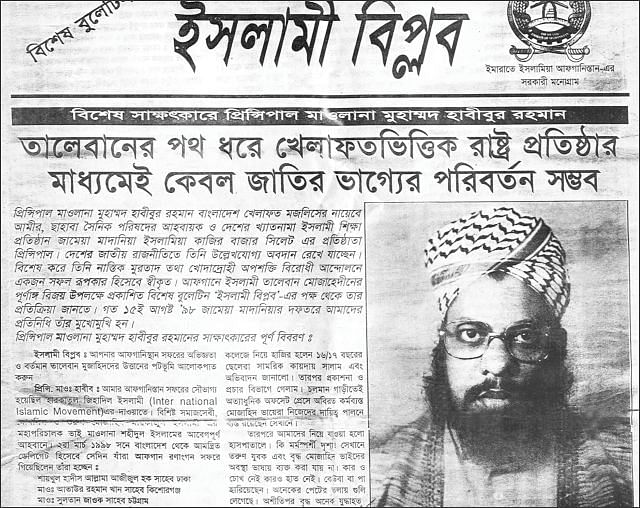 This is the bulletin published in 2004 in which Khelafat Majlish Ameer Habibur revealed his links with Huji and his meeting with Osama Bin Laden. He was a key organiser of Hefajat-e Islam's Dhaka long march and rally at Shapla Chattar yesterday. Image: Star archive

The bulletin on its front page ran an interview of Habibur in which he gave a detailed account of his visit to Afghanistan in 1988.
He said, "An invitation from Harkat-ul Jihad Al Islami made it possible for me to make the fortunate trip to Afghanistan... Those of us who visited the Afghan war fields during that trip are Shaikhul Hadith, Ataur Rahman Khan, Sultan Jaok, Abdul Mannan, Habibullah, myself and three others."
In Pakistan, leaders of the local chapter of Huji greeted the nine members of the Bangladeshi team and took them to the Huji's Karachi office.
Habibur said Huji Pakistan chief Saifullah Akhtar and a Bangladeshi Mujahideen, Abdur Rahman Shahid, drove them to an Afghan Mohajir (literally, refugee) camp on the Pak-Afghan border. They stayed at the camp and visited some injured Mujahideens and an Islamic cadet college, where the cadets received them with a guard of honour.
Abdur Rahman then drove them to the residence of top Mujahideen leader Abde Rabbir Rasul Saiaf, the narration goes on. The house was defended like a fort with anti-aircraft guns and armed guards.
On their way to Afghanistan the next day, the Bangladeshi team visited a special Mujahideen training camp in Pakistan and met about a dozen Bangladeshi young Mujahideens led by one Abdul Quddus. They watched youths from different countries being imparted military training on a mountainous terrain. The arms they were being trained to operate included rocked-propelled grenades.
That night Habibur shared his meal of dry cold bread with "a handsome young Arab". He said, "When I enquired about his identity, I was told he was Osama bin Laden, a son of one of the richest Saudi families."
The next day they entered Afghanistan and arrived at a Mujahideen cantonment on a mountaintop. They visited an armoury inside a tunnel. They were informed that some Russian forces were in position nearby and that every one must prepare to fight.
"All of us were given Kalashnikov [AK-47] rifles," he said, adding that they stayed the night at the camp, while a Mujahideen team advanced towards the enemy position and engaged in a skirmish. The following day they started their return journey.
In the interview, Habibur asserted, "Only the establishment of a Khilafat (pan-Islamic movement)-based state following the Taliban ideology can change the lot of the nation."
Habibur is also the convener of Sahaba Sainik Parishad and founding principal of Jameya Madania Islamia, a madrasa at Kazir Bazar, Sylhet.
The government banned Huji on October 17, 2005, branding it a “self-proclaimed terrorist organisation”.
Widespread criticism was sparked in 2006 when the Awami League made a controversial deal with Bangladesh Khelafat Majlish on December 23 that year.
In the deal, which never saw the light of day, both sides had agreed, among other points, that if the Awami League-led grand alliance assumed power, fatwa (religious edict) by certified Hakkani alems (educated clerics) would be recognised and the government would recognise the degrees conferred by traditional Qawmi madrasas.
Sylhet Awami League leaders were outraged in 2006 when Habibur became a possible nominee of the grand alliance in a Sylhet constituency for the January 22, 2007 elections, which were later cancelled.
The Awami League leaders and activists of Sylhet-6 (Golapganj and Biyanibazar upazilas) had threatened to quit the party en masse if Habibur was nominated by the grand alliance.
Some Awami League leaders in Sylhet told this correspondent in 2006 that Habibur was against the Liberation War and against the Awami League. He was against female leadership and had acted as a factor behind the Awami League's losing elections in Sylhet more than once.
"He had prevented poet Shamsur Rahman and Shaheed Janani Jahanara Imam from entering Sylhet. In 1992-1993, I managed to bring Shamsur Rahman to Biyanibazar, but could not take him to Sylhet because of Habibur Rahman," Ataur Rahman Khan, then Biyanibazar upazila Awami League general secretary, told The Daily Star in 2006.
In the 1990's, Habibur had declared a Tk 50,000 reward for author Taslima Nasrin's head.
Yesterday, at the rally at Shapla Chattar, copies of a booklet were distributed. A line of the booklet read, “If alems and olamas can run Afghanistan then Bangladeshi alems would be able to run the country with Allah's help.”