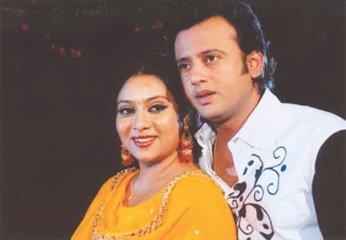 “Premer Tajmohol”, the 2001 release by director Gazi Mahbub featuring the duo of Shabnur and Riaz, turned out to be a commercial success and a massive hit among the audience.

Gazi Mahbub later went on to make another movie with the duo; Shiri Farhad - based on a classical Persian love story. After staying stalled in the pipeline for seven years since its making, “Shiri Farhad” finally hit the silver screen on Friday.

The director informed that the film has been released in 40 cinema halls across divisional, district and upazila cities, including the capital.

Asked about the long delay, Gazi Mahbub informed that over 15,000 feet of negative reel were destroyed after shooting, which forced the team to shoot afresh.

Meanwhile, actress Shabnur expressed joy at the news of the release, saying that it is great that a movie featuring the Shabnur-Riaz duo is being released after such a long time. Shabnur has played the character of Shiri in the film.

Riaz, on the other hand, said, “The movie will hopefully shine some light of hope on the film industry. We had great dreams while shooting for this film. I believe that the audience will like the character of Farhad, and that the movie will be able to have a lasting impression on the viewers.”

“Shiri Farhad” has been produced by Impress Telefilm and B.Baria Films. The movie also features stars like Don, Elias Cobra, Afzal Sharif and others.