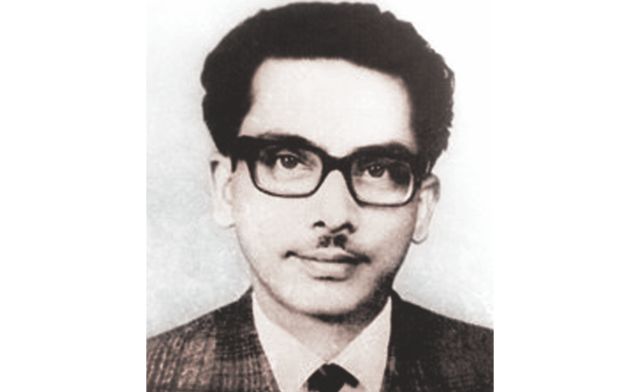 Shahhidullah Kaiser was born Abu Nayeem Mohammad Shahidullah on February 16, 1927 in Mazupur village of Feni, as the eldest of eight siblings. After completing honours in economics from Presidency College in 1946, Kaiser enrolled for MA in economics at Calcutta University, but could not finish his studies there. He became involved with cultural activism and politics. He joined the provincial Communist Party of East Pakistan after the partition of 1947, and joined the daily Ittefaq as a journalist in the '50s. He also played an important role in the Language Movement in 1952, and was imprisoned after it by the Pakistan government. In the next 10 years, he served a total of eight years behind bars. During this time, Shahidullah Kaiser wrote a number of remarkable plays, short stories and novels, including “Sareng Bou”, “Shangshaptak”, and “Rajbondi'r Rojnamcha”. His first plays written from inside the cell were “Naam Nei” and “Jadu-i Halwa”.
“I became a novelist because Ayub Khan sent me to jail” -- is one of Kaiser's most memorable quotes.
Shahidullah Kaiser was also a noted journalist. After getting released from prison in 1962, he joined the editorial section of daily Sangbad, and worked there till his death. He quickly moved up the ranks because of his literary skills, and became a central force of the newspaper. Besides regular columns, Kaiser also wrote under pseudonyms “Deshpremik” and “Bishwakarma”. He was also active with a number of other magazines and publications.
“Kobey Pohabe Bibhabori” (When will the night end?) was his only novel written from outside jail, and he could not complete it. Kaiser began writing it during the Liberation War, depicting the atrocities by the Pakistani forces. He would write during the night, bury his transcript underground at his Kayettuli residence before dawn, and dig it up to write again when night fell. He planned to write the novel in four parts, but could finish only two.
During the war, Shahidullah Kaiser provided support for freedom fighters in any way he could; he did not leave Dhaka despite repeated calls from his political allies in West Bengal. He would often supply rations to freedom fighters using ration cards that many people left with poet Sufia Kamal when they left Dhaka.
On December 14, 1971, a few masked men came and took Shahidullah Kaiser away from his residence. He never returned, and his body was not found either.