Safety is all they want 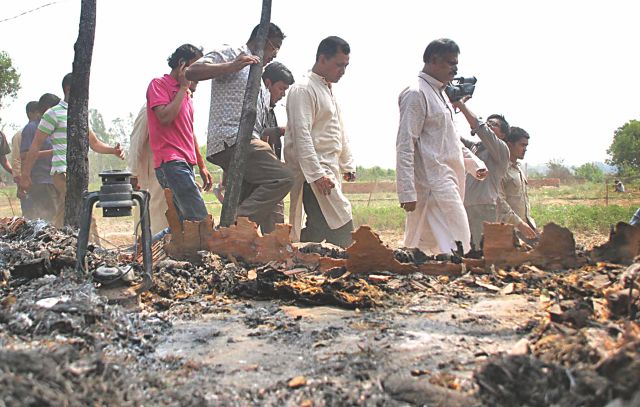 National Human Rights Commission Chairman Mizanur Rahman yesterday said no words can describe the brutality of the February 28 attack on the Banshkhali Hindu community.
“We are shocked to see the mayhem in Banshkhali,” he said at a press conference at Chittagong Press Club yesterday afternoon.
“They burnt down government offices, vehicles, important documents, textbooks including books of Islamic studies and many other public and private properties,” Mizanur Rahman said.
Visiting Banshkhali upazila in Chittagong yesterday morning, he met the victims of the violence unleashed by Jamaat-e-Islami over the death sentence to Delawar Hossain Sayedee in a war crimes case.
“The commission finds no language to describe this brutality,” the NHRC boss said. “It is very pathetic to share the feelings after what I have seen in Banshkhali. It seems the heart of Bangladesh is bleeding.”
Calling upon the government to compensate the victims, he said NHRC would submit a report on Banshkhali mayhem.
Mizanur Rahman also said, “The religious fundamentalists want to divide us and it is high time the politicians resisted them and showed patriotism and stood by the people.”
It is the responsibility of the state to bring back safety and peace among the people, he said, adding that any sort of slackness is unacceptable in this regard.
Nirupa Dewan, member of NHRC, and Shamim Ahmed, director of NHRC, were present, among others, at the press conference.
Earlier, Mizanur Rahman visited Banshkhali Upazila Parishad, courts of senior judicial magistrate and senior assistant judge, and Upazila Krishi Office, office of Upazila fisheries officer, office of upazila nirbahi officer (UNO) and some other places where vandalism and arson were carried out.
Aminul Islam, senior judicial magistrate of Banshkhali, showed the NHRC chief the gutted record room and the custody of the court.
Suchana Acharjee, one of the victims, described to the commission the brutality of the attacks.
"They came and beat up the men, women and children indiscriminately and torched our houses with gunpowder and shouted 'if you vote for Awami League, you would be beaten and your houses would be torched that way'," Suchana said as she was in tears.
"We are still reeling from the shock and apprehending further attacks," she added.
This correspondent also visited the upazila and talked to a number of victims. Rajan Das, owner of Saikat Pharmacy in the municipality of Banshkhali, is one of them.
The shop was burned to ashes along with 28 others hours after Sayedee was convicted by the International Crimes Tribunal-1.
After repeated attempts to choke back emotion, Rajan could share his harrowing experience during the NHRC chief's visit to the area yesterday morning.
Only the shops of Hindus came under attack, he said. "They looted our shops, ransacked those and finally set those on fire.”
Asked if they had got compensation, he said, "We don't want compensation. We just want our safety." 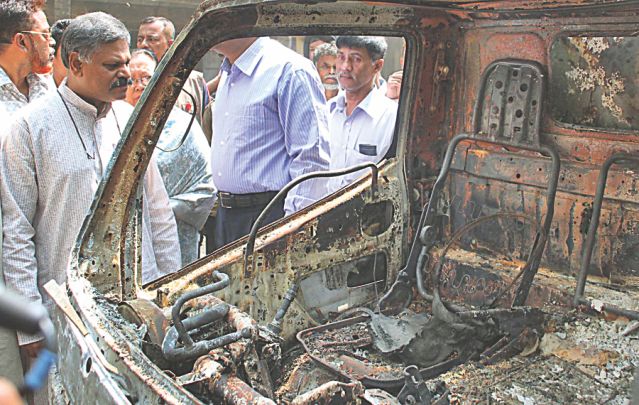 The wreckage of a burnt vehicle. Photo: Anurup Kanti Das

Jhantu Kumar Das, organising secretary of Banshkhali unit of the Hindu, Buddha and Christian Oikya Parishad, said the local BNP lawmaker had not visited them even nine days after the mayhem.
"They have vandalised and torched the temples, houses and shops of the Hindus and the administration has completely failed to give us safety. Despite their massive failure, the upazila nirbahi officer and the officer-in-charge of the police station are still in office."
He alleged the police and a number of ruling Awami League leaders were cashing in on the situation by harassing innocent people instead of netting the culprits.
"Five cases were filed accusing more than 12,000 people in this connection, but only 14 were arrested and four of them have already been released," he alleged.
"We called the UNO and the OC in the morning requesting additional forces to ensure our safety. But they did not listen to us. The UNO said nothing would happen."
Contacted, UNO Sabbir Iqbal said the Jamaat-Shibir men launched synchronised attacks on Satkania, Lohagara and Banshkhali. "It was a hartal day. So, we did not get support from other police stations."
OC Abdus Sabur said they had tried their best to bring the situation under control with the limited forces they had.
Addressing the press, Mizanur Rahman said if any political party tried to damage public properties resorting to militancy, it could be banned with an executive order.
“What they have done here can be termed a fight against the state,” he said. “By attacking important structures of the state, they attacked its sovereignty of the state.”
The government should not tolerate such activities, added the NHRC chief.