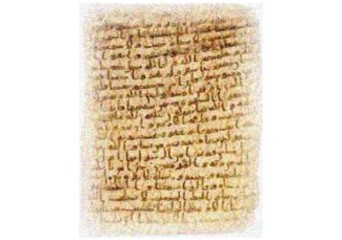 NOT since I was studying history in school that I have heard the phrase, "Medina Charter" being uttered so randomly than in the last one month. Talk-show 'masters' and politicians, particularly those belonging to the ruling party, have referred to the historic document in the course of discussions very often in recent times.

The Charter has been referred to in particular after the 13-point demand of Hefajat-e-Islam (HI) was placed to the government. The demands appear, to a great many people, to be regressive and run contrary to the fundamental principles of the country's constitution.

However, it also appears that the Charter is being flaunted against the Islamists almost as a defensive expedient, nay a shield against their onslaught, being carried out with the single purpose of establishing an Islamic regime in the country. It is interesting also to note that none of the Islamic parties including the Jamaat -- and the Islamic parties are a fractured lot today -- have so far referred to the Charter at all.

It is just as well that the Charter has come to the forefront of national discourse, more so after the PM had referred to it very recently while countering the 13-point demands of HI. She made a bold statement, wittingly or otherwise one cannot say, when she affirmed that the country would be run as per the Charter of Medina and the farewell sermon of the Holy Prophet (pbuh).

Having uttered these words, the PM should be ready to receive flak from particularly those who are irked by references to anything even remotely related to Islam and politics. I suspect these people are perturbed by the fact that the so-called secular credentials of the constitution would be sullied by any reference to the Medina Charter. And to some, her remarks betray a confused mind, quite at a loss as to how to assuage the frayed mind of the Islamists and those that have joined ranks with them by offering their support. And some have reacted to the PM with a mono-syllabic response -- "really?"

It is just as well that the first of the world's socio-political covenants is being recalled. The current situation in the country makes the Charter so very relevant, and thus worth reflecting upon. And if some of the religious groups, as well those who want a secular and pluralistic society in Bangladesh (and I believe that this group is in the majority), were to scrutinise every single clause of the charter objectively, shedding their blinkered view, they would find that in the prevalent turbulent atmosphere in the country, taking lessons from not only the final document but also understanding the background that led to the formulation of the Charter may help attenuate the current abrasive situation.

The Medina Charter was a social contract formulated more than a thousand years before such an idea was theorised in the west during the Age of Enlightenment, and was based not on the abstract but on an "actual agreement involving people."

It was a classic case of resolution of longstanding dispute in Medina by abjuring violence and by engaging in discussions to regain peace, and where the Holy Prophet (PBUH) played the mediator's role -- a remarkable achievement given that he represented a religious group which at that point in time was only just growing in size -- through display of mutual respect of every community, and where, shedding past practice, tribal and ethnic interests were subordinated to that of the entire community.

It was a unifying charter that embraced, within the rubric of the city state, all the different faiths and beliefs, as one single community. It was thus not "us" and "they" but "we," and the residents of the city state were united not under one religion but, "under one banner of ethical living and moral principles -- commonalities between all humans and all religions." That dissolved the notion of "majority" and "minority." It was the basis of a truly a pluralistic society.

I choose to be neither a critic nor a cynic, and in all fairness to the PM, am rather inclined to believe that even though the reference to the Charter, as being the guiding principle for running the country may be a riposte to the HI, that it is the spirit of the Charter that she was alluding to, a spirit which, if embedded in our way of life, might help remove much of the differences that exist in our society.

There are lessons for all of us here. It is an inclusive society that we want, where peaceful coexistence must be established even with those that do not conform to our beliefs and mores, and as the Prophet (pbuh) has demonstrated, even those that hold different views of religion and God have the right to coexist and the state has the obligation to protect. No one has the right to denounce any particular group.

One would hope that our leaders would refer to the Charter not as a political expedient but as a means of making the society truly inclusive.

The writer is Editor, Oped and Defence & Strategic Affairs, The Daily Star.