Nobo Borsho and Pahela Baishakh: The Past and the Present | The Daily Star
Skip to main content
বাংলা T
Post Campus

Nobo Borsho and Pahela Baishakh: The Past and the Present 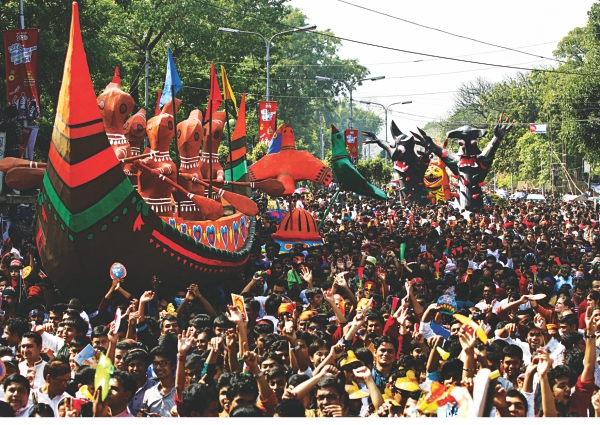 The Bangla Calendar (Bangla Shon) is considered to have started from the times of Shashanka, the great ruler of Gour. It is a solar calendar around which seasons and agriculture evolves. All months are named after a star or constellation except Agrahayan (the first month). Pahela Agrahayan welcomed the main harvest, the Aman Harvest and was thus celebrated as New Year's (Nobo Borsho) for centuries as Nobanno- feast welcoming the new harvest.

In Mughal times, a lunar calendar was used to collect taxes. Tax payment based on the lunar calendar was not always convenient for the majority of the payers, the peasantry, whose agricultural produce depended on the movement of the Sun. To make tax payments convenient, Akbar The Great introduced Tarikh E Elahi. Akbar's Royal Astrologer, Fatehullah Shirazi, synchronised the lunar and the solar calendars. The name of the months remained unchanged. Baishakh was chosen as the first month of the year while Tarikh E Elahi was calculated from the year of Akbar's ascendance to the Throne in 1556 AD. Pahela Baishakh became Nobo Borsho.  On New Year's Eve (Chaitra Shonkranti), the last day of the month of Chaitra, businesses clear their debts. On Pahela Baishakh, Nobo Borsho is welcomed on a clean slate (Hal Khata).

Bangla Academy modified the Bangla Calendar (Panjika) in 1963 with Muhammad Shahidullah as the head. It was synchronised with the Gregorian Calendar. The first five months (Baishakh to Bhadra) have 31 days, and the next seven months (Ashwin to Chaitra) have 30 days.  Falgun becomes 31 days in a Leap Year.  From 1988, the Government started using Shahidullah's calculations. The new Bangla Calendar formally started on Pahela Baishakh 1402 BS (April 1995).

Mass popularity of Pahela Baishakh started from rural fairs. These fairs provided an outlet for traders and artisans to find a certain market to sell their products. They also attracted artistes and entertainers in music, games and fun fair. Alongside the ubiquitous Nagordola, Kite flying in Old Dhaka, bull racing in Munshiganj, and wrestling in Chittagong still attract attention at Baishakhi Melas just as much as cockfights, pigeon racing, boat racing and other time-tested entertainments. With singers and performers, Baishakhi Melas have preserved epic folk tales like Laili-Majnoor, Yusuf-Zulekha, and Randha-Krishna.  However, Pahela Baishakh was waiting for its Prince and its festive food. The Prince emerged with the tune Esho He Baishakh, Esho, Esho. The feast emerged with Panta Bhat (watery rice) and Shorshe Ilish (Hilsa in Mustard Seed). Pahela Baishakh was starting to gain its own identity.

Dhaka's emergence as a mega-city, growth of urbanisation in Bangladesh, and steady economic growth from the 1990s has had beneficial effects on local industries and employment creation. The deshi fashion, food, handicrafts and handmade toys industries all eagerly wait for Pahela Baishakh. The innovative mind of the Bengali is very much alive. The traditional Panta Bhat and Shorshe Ilish is still at the top. Stop and do not be surprised if a set of handmade Dug-Dugis and a Tamboura accompany the platter, and a Matir Bank to see you through in lean periods. 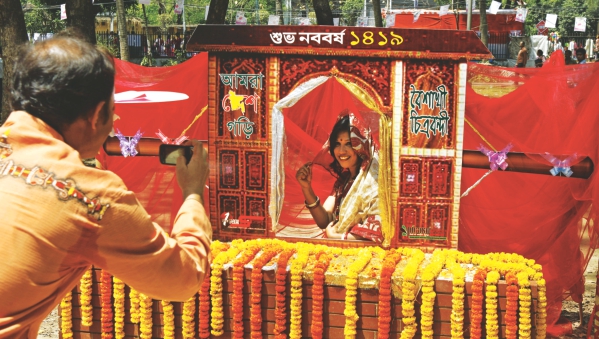 Nobo Borsho Celebration is an ancient tradition of the people of this region. Photos: Anisur Rahman

Today many Bangladeshis work, study or live outside Bangladesh. Wherever Bangladeshis have gone, they have taken with them two things: their food and their cultural expressions. It was just a matter of time that the Charukola Carnival with Esho He Baishakh and Melai Jaire would make its presence felt outside Bangladesh. Today the Pahela Baishakh Festival at Brick Lane in London is the largest open-air Asian festival of Europe. After the Notting Hill Carnival, the Pahela Baishakh Festival is the second largest street festival in the UK attracting 80K plus people from UK and Europe. Small wonder the celebration started only in 1997! What more can one say about the positive image Bangladeshis have the potential to show the World?

Nobo Borsho celebration (Nobanno and Pahela Baishakh) is an ancient tradition of the peoples of this region. Through its colours, tunes and all its razzmatazz, Pahela Baishakh in modern times is a common destination where all the different colours and tunes of Bangladesh and the Bengali nation congregate together, even if it is for one day.  Esho He Baishakh, Amra Melai Jaire. Shubho Nobo Borsho.