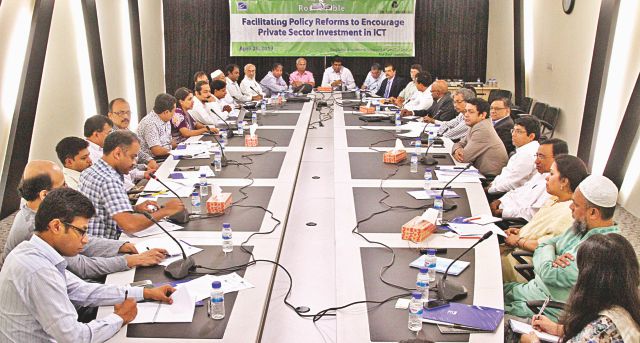 Analysts take part in a roundtable on policy reforms to encourage investment in ICT, co-organised by Bangladesh Association of Software and Information Services and The Asia Foundation, at The Daily Star Centre in Dhaka yesterday. Photo:Star

The country should adopt long-term plans to develop the ICT industry that has tremendous potential, but the government is still pursuing a makeshift approach, analysts said yesterday.
“The ICT sector is not growing at the expected pace due to problems with policy, but it can become a billion dollar industry,” said Hasan M Mazumdar, country representative of The Asia Foundation, a non-government organisation.
He said a huge number of Bangladeshi expatriates in the US want to invest in the local ICT sector but negative policies and regulatory issues dent their confidence, he said.
Mazumdar spoke at a roundtable on "facilitating policy reforms to encourage private sector investment in ICT" at The Daily Star Centre in Dhaka.
Bangladesh Association of Software and Information Services (BASIS) and The Asia Foundation co-organised the discussion where leaders of different trade bodies in the sector were present.
Speakers said policy reforms for software export and import, easy regulation, content development efforts by the government, tax waiver for internet use, and easy bank loans can boost the sector.
Nazrul Islam Khan, ICT secretary, said some small changes to the existing rules and regulations can make mobile payment a huge success; such payments worth thousands of crores of taka would be made possible through mobile phones.
“There are 25,000 government websites but people cannot use the sites due to a dearth of broadband connectivity.” A holistic approach is required to spread internet, he said, adding that the internet price is still very high in the sub-urban and rural areas.
The internet service providers will have to work more on minimising the costs, he said.
Rakesh Saha, a partner of Ahmed Mashuque and Co, a chartered accountants partnership firm, said people need to take permission from the central bank and the National Board of Revenue to import software, which takes around 70-80 days.
This discourages foreign companies from exporting software; it takes 2-3 days in India to get such approvals, he added.
An organisation can be floated to certify software import, he said.
MD Ahsan Ullah, executive director of Bangladesh Bank, said the central bank does not have any benchmark to examine software imports that may cause over invoicing. So the process takes time, he added.
A coordination committee among the officials of the commerce ministry, central bank and the NBR can be formed to ease the process, he said.
Abdul Mueed Chowdhury, a former advisor to the caretaker government, said the central bank should approve the money for software imports while the NBR can examine whether the purchase is okay. This process will take less time, he added.
Dr Rokonuzzaman, an associate professor at Independent University of Bangladesh, said the bandwidth price for the end users is not coming down in line with the fall in wholesale prices.
“The ISPs are charging additional fees over the bulk bandwidth price.”
The state-owned Bangladesh Submarine Cable Company Ltd was supposed to be the most flexible entity but it could not create a competitive market.
Now the ITCs (international terrestrial cable) have made the market competitive, he said.
As the transmission and operational costs have not been reduced, the ISPs cannot offer lower prices for internet.
The bandwidth charge is just 25 percent of the total cost of an ISP, said Sayed Mohammad Tarikul Islam, joint secretary of ISP Association of Bangladesh.
Mannan Khan, chairman of Mango Teleservices, an internet gateway, said since his company started business five years ago, the country never faced massive internet disruption as the company always managed a backup for the Dhaka-Cox's Bazar route.
Mango is preparing a transmission backbone throughout the country, connecting 24 districts, which will reduce transmission costs. The bandwidth price in Dhaka and local areas will be the same after it starts working, Khan said.
Russell T Ahmed, secretary general of BASIS, said bandwidth prices were reduced drastically in the last couple of years. The ISPs did not cut internet prices but they are offering more speed with more capacity, he added.
The large internet using countries, such as South Korea, China, Russia and the USA have developed huge local content, Ahmed said. “The Bangladesh government should encourage it.”
Sabir Ahmed Sumon, adviser to Fiber@Home, a national transmission company, said the ISPs purchase bandwidth for Tk 3,500 to Tk 4,000 per Mbps but sells it for Tk 6,000 to Tk 12,000 due to high quality or redundant (backup) facilities.
Bulk bandwidth prices in Bangladesh are low, even less than in India, said Sumon. But the people are not getting the benefit due to higher transmission costs. The government should offer easy loans for infrastructure development, he added.
Nafiul Hasan, deputy secretary of the telecom ministry, said the ministry is in a position to reduce 15 percent duty over internet use, which will encourage the sector to use more bandwidth.
Speakers also urged for tax and revenue sharing waivers for e-commerce and outsourcing for the next 15 years.
AFM Fahim Mashroor, president of BASIS, said there are around 800 BASIS-approved software companies in the country, while 1,500 more companies are in operations.
He said 200 companies are engaged in exporting software or IT-enabled services and the size of the industry is $200 million. This year, exports will cross $100 million, he added.