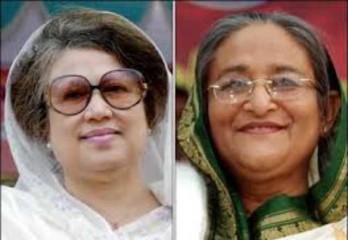 UNTIL Wednesday, March 27, it was almost impossible   to find an instance in parliamentary democracy  in any country where its two supreme leaders did not talk to each other and it's Supreme Court issued  a rule asking them to explain why they should not be directed to sit for  dialogue to resolve the political standoff.

This unprecedented record now belongs to Bangladesh since March 27, 2013, which may be a historic day in the country's journey towards parliamentary democracy, which was restored in 1991 after the fall of Ershad's autocratic regime.

Credit for the rare achievement goes to the two supreme leaders -- Awami League chief Sheikh Hasina and BNP chief Khaleda Zia -- and the respective parties they have been leading for more than three decades.

It could not have been possible had the political rivalry between the two top leaders not made them political enemies and not made the parliament completely dysfunctional.

Many people have expressed skepticism about the fate of the Supreme Court's move to bring them to the negotiating table to resolve the ongoing political crisis and bring relief to the people from the fear of further political violence. However, it is not the job of the country's apex court to mediate in political matters.

In the past, political crises had paved the way for military intervention in politics. But the way the country's political situation has been turning volatile -- jeopardising people's security and their freedom to move and to work -- the Supreme Court, by coming  into the scene, has made it clear that it is also a part of the society.

The situation, however, was much better after  resumption of parliamentary democracy, but the tragedy is that good practice could not evolve.

For instance, under their leadership, their parties held dialogues several times in the Fifth Parliament in 1994 and the Seventh Parliament in 1997 to resolve parliamentary standoff that had prevailed then, and some issues had been resolved through these  talks.

The culture of House boycott was created in the Fifth Parliament by then AL-led opposition parties, and waging street agitation to topple the government gained fresh impetus in the successive parliaments thus diminishing the growth of good practice.

Under their leadership, their parties did not sit for any talks in the Eighth and the current Ninth Parliaments to resolve the parliamentary standoff although both the parliaments faced serious  problems, including the House boycott by the opposition.

At end of the Eighth Parliament in 2006, the then secretaries general of AL and BNP sat for a dialogue in the parliament building to find ways to resolve the political crisis centering the appointment of chief adviser to the caretaker government. But the talks failed to yield any result as both sides remained rigid in their stance.

Under Hasina's leadership, AL had launched vigorous street agitations thrice (including the one against the BNP-led government formed through February 15, 1996 polls) to oust Khaleda from power.

Hasina, who gave birth to the boycott culture, had also faced the same music when she was in power during 1996-2001 as her archrival Khaleda waged agitations to oust her from power. And now, Khaleda is again waging a one-point movement to oust Hasina from power. The million dollar question i: How can relations between them remain good if the one who is in the opposition bench wages street agitations to oust her rival from power? In return, the leader who is in power exerts force to suppress the opposition, which increases animosity between the two sides.

Hasina and Khaleda, who had simultaneously waged vigorous street agitation to oust the autocratic ruler Ershad, had sat for talks on several occasions and also kept contact over telephone. Undoubtedly, there was very cordial relation between them when they were fighting for the same cause.

But when the time came to govern the country, relations between them changed due to changes in their mindset. The animosity between them started growing. They started blasting each other. And they even stopped talking to each other, let alone holding discussions to resolve any political issue.

How many times did they talk to each other in the last five years? Let us recall some occasions. On November 21, 2008, Hasina and Khaleda talked to each other at a programme marking the Armed Forces Day at the Dhaka Cantonment. On May 9, 2009, Khaleda went to Sudha Sadan, Hasina's residence, to express her condolences  on the death of Hasina's husband Dr. Wazed Mia. They again exchanged greetings on November 21, 2009, at a programme marking the Armed Forces Day. But the situation changed in 2012 when they refrained from talking to each other at the Armed Forces Day's programme. The death of President Zillur Rahman brought them to Bangabhaban on March 21 to pay homage to the deceased president. But they did not even exchange greetings, let alone talk.

The way they have been blasting each other demonstrates their mutual hostility . For instance, Khaleda Zia, at a Bogra rally on March 24, said that Hasina would be put in the dock for committing "genocide" and corruption.

In response, Hasina, on March 27, launched a blistering attack on Khaleda saying: "Go to your (Khaleda's) 'Pyara Pakistan,' you'll feel good there."

Amid such a situation how will it be possible for the High Court Division of the Supreme Court to contribute to holding of talks between Hasina and Khaleda and their parties?

Parliamentary democracy is considered to be a better and more civilised system of government inasmuch as under it debate and discussion on the legislative floor take the place of physical strife on the streets or on the battlefield. The parliament is the legitimate arena for power struggle. But the parliament in Bangladesh has been made dysfunctional. It cannot play any role in resolving political conflicts.

Therefore, the political parties take to the streets as a means to realise their demands, ventilate their grievances, and also to go to power. Until or unless this perverted culture is changed, parliamentary democracy cannot take root in Bangladesh.

The writer is Senior Reporter, The Daily Star.