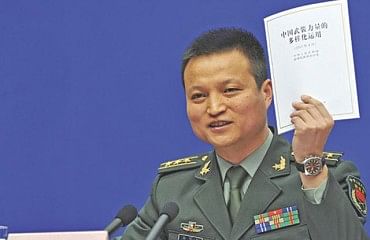 THE first Defense White Paper released by China under the new leadership of Xi Jinping initially appears to follow the general trend set by the seven white papers published earlier. Even as it emphasizes the familiar "five principles of peaceful coexistence," the "new security concept" and China's commitment to peaceful development, it differs from its predecessors in small, but very significant ways.

The first notable change is the very title. From the bland heading of "China's National Defense in " this year's White Paper has a thematic title "The Diversified Employment of China's Armed Forces." The sections are not as numerous as previous papers and conform broadly to theme suggested by the title. What this has meant for the contents is that, although the White Paper does for the first time give numbers of the forces in the various arms of the People's Liberation Army (PLA), it does not elaborate on the domestic systems for the transformation of a mechanized army to an informationised one. The focus is on highlighting the activities of the armed forces, and the exercises, operations and joint-training programmes are adequately catalogued - but do not present any new information. The White Paper on China's National Defense in 2006 had put the number of PLA troops at 2.3 million. Subsequent White Papers did not give a comprehensive number. This latest document gives the figures for the PLA Army, PLA Navy and PLA Air Force as almost 1.5 million. The status of the 800,000 plus that were counted in the 2006 document is not explained. These obviously include officers and troops of the PLA Second Artillery Force and possibly others in research organizations. That there has been a reduction in total numbers is a safe assumption but where precisely reductions have been affected remains unclear. The figures provided are far from comprehensive and can hardly be considered a major step towards transparency.

Conspicuous by its absence is also any mention of China's defence expenditure. As a document that purported to explain China's thinking on national defence, especially to other states, an exposition of defence expenditure was made in each previous edition. This was seen as recognition of the persistence of the "China threat" thesis and the need to mitigate it at least on the count of defence spending. That defence expenditure does not feature at all in this eighth white paper is significant. It seems to suggest that the Chinese government is no longer concerned with fighting the idea of a China threat premised on its defence spending. Far from elaborating on earlier explanations (which were deemed unsatisfactory by a vast number of scholars), it would appear that Chinese leaders have decided to do away with the entire enterprise. Statements made during the National People's Congress with regard to the defence budget will now have to suffice. Unlike the last White Paper, the current one does not mention "suspicions about China, interference and countering moves against China." Is the new leadership then prepared to give up the rhetoric of victimhood that has pervaded China's foreign policy articulation?

Absent also is the reiteration of China's nuclear policy or its stance on issues of non-proliferation. Developments related to the Korean peninsula and its nuclear dimension are notable omissions. Were China seriously considering a change in its policy towards the Democratic People's Republic of Korea (DPRK), as some readings into China's support for limited sanctions in the aftermath of the third nuclear test by North Korea have suggested, the White Paper would have been an excellent avenue for communicating this. That the White Paper steers clear of DPRK related issues hints, at best towards attempts to not overemphasise the problem, and at worst, an aversion to reviewing China's policy stance.

The latest White Paper clearly indicates growing Chinese confidence on the international stage. From emphasizing that China's "comprehensive national strength has stepped up to a new stage" in 2011, the current white paper simply states modernization of China's armed forces should be "commensurate with China's international standing." The Asia-Pacific region is once again identified as the hub of global economic development and strategic interaction. Curiously this white paper (unlike the last) stops short of identifying the United States (US) directly as the country that is reinforcing its military relationships in the Asia-Pacific and thereby making the situation there "tenser". The new leadership in China is perhaps aiming at reducing friction with the United States on maritime issues? Mention of the Military Maritime Consultative Agreement between the navies of the US and China for regular exchange of maritime information in a later section suggests that mechanisms of cooperation rather than disputes are sought to be highlighted at least with regard to the US. Japan is mentioned for "making trouble" over the Senkaku/Diaoyu dispute. This is unsurprising and can be seen as a reaction to the Japanese Defence White Paper of 2012 which emphasized increased Chinese aggression. Rather than repeatedly emphasizing a "defensive" policy, the white paper enunciates the principle that, "We will not attack unless we are attacked; but we will surely counterattack if attacked." Those familiar with Mao Zedong's writings will recall that this was the first principle of 'self-defense' Mao spoke of in his tactics in the anti-Japan United Front. The second related principle was one 'victory'- that one must fight only when certain of victory. The third was the principle of 'truce', which advised ending a fight when one is winning before a counter attack is made by the adversary. It remains to be seen if the current leadership is satisfied with resurrecting only the first of these principles or will take the other two into consideration

There are changes in the threat perceptions as well. Although the familiar lament about Taiwan independence as the biggest threat to cross-Straits relations remains unchanged, no longer are "East Turkistan independence" and "Tibetan independence" highlighted as challenges even though the threats by the three evil forces of terrorism, separatism and extremism are seen to be on the rise. Does this indicate a sanguine frame of mind as far as China's restive periphery is concerned or represents an attempt to downplay ethnic problems? The domestic challenges to social harmony and stability are also seen to be escalating. In this regard, the focus on the domestic role of the PLA in peacetime and its activities in local level economic and social development are important. The projection of the PLA's utility in fostering sustainable development (under the leadership of the Communist Party) helps emphasise the current leadership's concern with the lives of laobaixing - ordinary people.

There is an inclusion of "issues of subsistence and development security" to the usual traditional and non-traditional threats to security. It remains unclear what exactly these issues refer to. However, given that "development interests" and "overseas interests" are repeatedly mentioned throughout the document, an expansive interpretation of China's interests that would necessitate greater global activism can be expected. The emphasis on China's international role in this White Paper be it humanitarian aid and disaster relief, the rescue of Chinese citizens during the Libyan crisis, peacekeeping operations under the aegis of the United Nations or naval escorts off the Gulf of Aden suggests that China is seeking to legitimize its international presence. The trite task of "maintaining" world peace and stability is now transformed to "safeguarding" world peace and regional security. This change in terminology can be seen as an important indicator of a changing external outlook. Will proactive policy action and Chinese exceptionalism replace the rhetoric of victimhood and 'sabotage by outsiders'? This White Paper certainly seems to suggest so.

The writer is Associate Fellow at the Institute for Defence Studies and Analyses (IDSA), New Delhi.