Cyber cafés on the slow lane 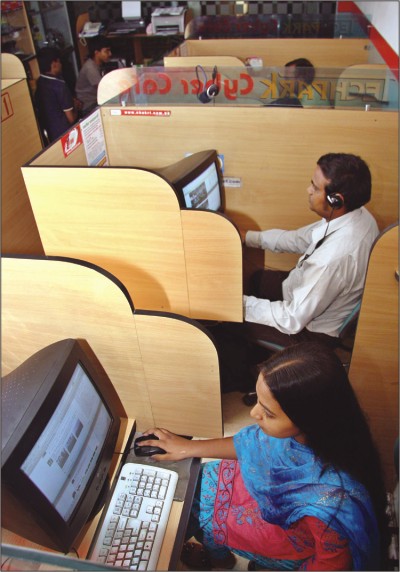 A few users are seen in a cyber café in Dhaka yesterday. The setting-up of an internet café is no longer a good business prospect. A price war and lack of discipline are to blame for sluggish growth of the sector. Photo: Amran Hossain

A new cyber café is no longer a lucrative business prospect and the sector witnessed idle growth over the last four years due to a lack of discipline and unholy price wars.
The number of cyber cafés across the country in 2005 was 800. The figure remained the same in 2009, according to a study by the Cyber Café Owners Association of Bangladesh (CCOAB).
"Escalating business costs, price wars and a lack of discipline in the sector are the main setbacks to growth," said Ashfaquddin Mamun, senior vice president of CCOAB.
Virtual cafés flourished mainly after Bangladesh linked with an under-sea cable in 2006 and young entrepreneurs came forward to set up cyber cafés in parts of the capital. Later, the business mushroomed in divisional cities.
According to CCOAB, there are around 2,000 cyber cafés across the country, while a majority do not operate with commercial purposes.
Several entrepreneurs operate with two to three computers in their home or along side another business, which should not be counted as a commercial cyber café business as such, said Mamun, who runs a café at Indira Road in Dhaka with a capacity of 13 users.
"The problem with non-commercial cyber café operators is that they charge low prices, and it becomes difficult for us to compete in the market," he explains.
Presently, cyber café owners charge Tk 20 to Tk 25 for an hour to browse the worldwide web.
Mamun acknowledges that the government's bandwidth price cut helped them to reduce a percentage of operating costs. But other costs, such as electricity, space rent, staff salaries, generator charges, and maintenance costs, have doubled in the past few years.
The Bangladesh Telecommunication Regulatory Commission (BTRC) designed a guideline for cyber café owners last year, under which, café owners were mandated to be licensed. As of today, only 70 owners took the licence.
"So, there exists no mechanism to bring complacency in the sector," said the CCOAB senior vice president.
Morphing consumer needs still provides a ray of hope for growth of the sector. Students and job seekers are the top café users, who in addition to academic purposes and posting online résumés, most commonly log onto Facebook and other social networking sites.
Citing a recent online job circular by Bangladesh Bank, Mamun said people rushed to his café to fill the required online form.
"Similarly, when people solicit increased services on the net, business for them would boom eventually," he said.
In Bangladesh, internet penetration stands at 4 percent in 2009 from 0.4 percent in 2001. The growing popularity was mainly because of rapid mobile internet growth and availability of low-priced computers and laptops in the market.
According to industry insiders, around four million people are now using the internet, of which more than 90 percent are connected by mobile operators. Local internet service providers connect the rest.
Telecom operators are now selling internet modems at Tk 4,000 and they charge Tk 500 to Tk 850 in monthly line rents, which is partially to blame for sluggish growth in the cyber café businesses.
The number of internet users jumped over the years due to rapid mobile internet growth.
Grameenphone and Citycell are also selling internet modems, which is becoming a vogue among students, who also happen to be the main cyber café visitors.
"The sector has not developed in recent times. But because the technology is still beyond the reach of the commoners, demand for cyber cafés is expected to surge," said Johirul Hossain, president of CCOAB.