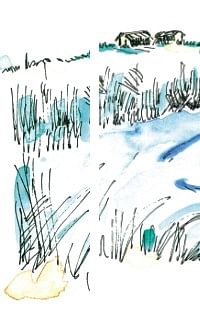 Of my land only a little remained, the rest having been mortgaged away.
The zamindar said one day, "Know what Upen? This too should come my way".
I said, "O Lord, countless are the plots of land you already own,
But consider--I only have land enough to bury me when I'm gone!'
The zamindar brushed me aside saying, "Upen, I'm building a garden,
Your half-acre will allow me to design for it a lovely fountain--
You'll have to sell all you've got to me!" I replied, tears in my eyes
And hands on my heart, "Spare this poor man's land, or else he dies!
For seven generations we've tilled this plot and it's everything to me,
And selling it will be like selling my mother because of poverty!"
The zamindar reddened, kept mum for a bit, and then gave a peculiar smile,
In a forbidding manner, he muttered under his breath, "we'll see in a while!'

In six weeks I was forced out of my ancestral land and into the road
By a court decree. Falsely, it said I had defaulted on a loan and owed
The zamindar the whole lot! Alas, in this world those who have most want all
And even a king won't stop until he has grabbed everything--big or small!
I consoled myself: God has decided not to confine me to my plot of land;
Perhaps I am fated to roam far and wide and end up in some distant strand.
And so I became a mendicant's assistant and followed him everywhere
Visiting shrines that were memorable and seeing sights that were fair.
But no matter whether I climbed high peaks or reached a remote river bend
The thing I could never forget night or day was my little plot of land!
And so I traversed country fairs, fields, and roads for fifteen years or so
Until homesickness made me feel to my country once more I must go.

I thought as I went: lovely motherland Bengal--I bow to you lovingly!
Your exquisite riverbanks and gentle winds will surely revive me.
I'll thrill at skies kissing dust swirling up from wide open fields;
I'll seek in the sylvan shade of a tiny village an abode of perfect bliss.
I'll revel in its mango trees and cowboys playing on lush green meadows
Bengal's calm and shaded ponds will be cool and comforting to see
And surely I'll delight at sweet village belles carrying water home daily.
Such thoughts of my motherland made me sad and tears welled up in me.
Two days later--at noon-- I entered my village-- oh so eagerly!
Past the potter's shop and left of the field where festivals are held I sped
Leaving the fairground--site of all delight-- and the temple ground
I hurried to my homestead--thirsty, eager and completely exhausted!

Shame, shame, oh shame on you, my shameless little plot of land!
How is it that you yielded so easily to the seducer's blandishment?
Do you remember how you once nurtured me with what little you had?
How you provided me with fruits, flowers and produce from your bed?
Who are you trying to seduce now in fancy and dazzling dresses?
Why deck yourself in alluring colors and flower-studded tresses?
It was for you I came back worn out by years of wondering
But you, wanton, are only bent on being coy and enchanting!
Riches enticed you and the landlord's wealth made all the difference
And nothing remains of what you once were--a maiden in essence!
So bountiful and giving once, so caring, sweet and pleasant,
Seduce him all you can-- once a goddess, now you're a mere servant!

With a grieving heart I looked around and what then did I see?
Still erect where it always stood was my favorite mango tree!
I sat down and wept till tears doused the pain that was in me
One by one, images of childhood resurfaced in my memory.
I recollected how after summer storms I wouldn't sleep at all,
Knowing I had to gather by dawn the mangoes sure to fall
I thought of still fun-filled afternoons when we played hooky
And I felt: what a pity that such days I will never again see!
Suddenly a gusting wind shook the branches of the mango tree
And two ripe mangoes fell on the spot where I happened to be.
Surely, I thought, my mother has finally seen her long lost son,
And so I gathered the mangoes she gave me on this occasion!

Suddenly, as if an angel of death, an Oriya gardener was in the scene
Hair in knot, this man swore and threatened in a way that was obscene.
I told him, "I gave up all years ago without protesting the court decree
Why fuss if I pick up two mangoes from what was my property?"
Unimpressed, the gardener seized me, directing his stick at my head.
Dragging me to his landlord, he complained to him about what I said.
The zamidar, egged on by his cronies, thundered, "You're as good as dead!
But his abuse was nothing compared to what his cronies had to say.
All I could say in defense was, "my lord, those mangoes fell my way."
The zamindar said, "This scoundrel acts innocent but is a big thief!"
I was in tears but smiled ruefully at being made the source of all mischief.
I thought: he acts the saint now but I have to play the role of the thief!

Fakrul Alam is professor of English at Dhaka University.