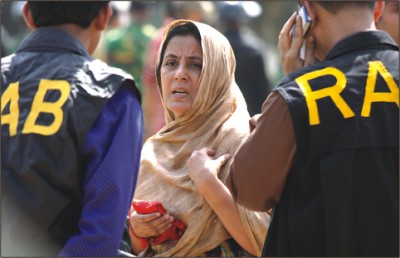 The body count in the mutiny at BDR headquarters stood at 63 yesterday as 72 army officers remained untraced, Military Intelligence (MI) announced last night.
At a press briefing in Dhaka cantonment, MI Director Brig Gen Mahmud Hossain also said that 47 of those retrieved dead have been identified.
Besides, he added, 31 officers deputed to the paramilitary force have survived the revolt by border guards.
Meanwhile, two days into the end of bloodbath, rescuers yesterday discovered three more mass graves and pulled out 10 bodies including the slain BDR chief Major General Shakil Ahmed's wife Naznin Shakil.
Early Saturday fire service personnel recovered an army officer's body from a sewer in the compound. With the recoveries, the death toll rose to 73, up from 62 on Friday, said officials involved in the rescue operation.
Of those confirmed dead, some 60 are army officials, they added.
Meanwhile, it could not yet be known exactly how many officers were at the headquarters when the mutiny erupted in Darbar Hall at around 9:00am.
According to rescuers and army information centre at Pilkhana, the people who could provide the information have died or been missing.
Rescuers said the registry book at the Darbar Hall does not say exactly how many officers attended Wednesday's programme.
Besides, it is now quite difficult to check up on the number of participants from 12 sectors and 46 battalions as there are few officers left to cooperate to that end.
Speaking in return for anonymity, a rescuer yesterday told this correspondent, “It seems there might have been 138 army officers and 30 BDR officers at the Darbar Hall Wednesday.”
As 31 army officers have come out alive and 60 have been found dead, it leaves about 50 on the missing list.
Colonel Gulzar Uddin Ahmed, lauded for his role as a Rab official in the drive against militants, especially those of Jama'atul Mujahideen Bangladesh (JMB), is among those missing.
He was posted to BDR in Sylhet early this month.
Before being promoted as additional DG of Rapid Action Battalion (Rab), he was in the intelligence wing of the elite crime-busting force, and conducted some major investigations.
He led the operation that netted JMB operations commander Siddiqul Islam alias Bangla Bhai.
Gulzar's family drew a blank in their search for him among the bodies retrieved so far.
In the last three days, his sister Dilruba Khatun and other relatives have visited Mitford Hospital, Dhaka Medical Hospital morgue and the sewers coming off BDR Pilkhana for their beloved Gulzar.
A shattered Dilruba yesterday said, “Several times we were told his body had been found. But that didn't turn out to be the case. None of the bodies recovered is my brother's.
“It pains me to think of how a man of his stature still remains untraced. He had always been dedicated to the service of the state. We should at least know if he is dead.”
It was soon after the madness set in Wednesday that Gulzar's friends at Rab heard from him last. In his first call at around 9:00am, he sought help for him and the other officers under attack.
His last call came at around 10:00am. He said he was “done for” and asked the friends to take care of his family.
Meanwhile, rescuers said that besides ransacking the houses and properties of the army officers at Pilkhana, the mutineers vandalised offices including that of the DG. They fired at will inside these offices.
“A lot of important documents have been destroyed during the rampage there,” said Major Momtajur Rahman of Rab.
The rescue teams are now trying to assess the quantity of arms and ammunition used in the carnage over two days, said another official involved in the operation.
“We must retrieve the inventory of the BDR armoury. If the amount of arms and ammunition used by the mutineers surpasses the weaponry on the inventory, we'd know some of the supplies came from outside,” he added.
The troops' use of red, yellow and green cloths to hide their faces while talking to the media at different BDR entrances raises questions if the colours signified anything in terms of command and execution, he added.
Certain colour denoting certain responsibility to be carried out by a mutineer would mean it was a carefully orchestrated campaign to kill the officers.
The Pilkhana gates remained crowded for the fourth day yesterday. The authorities have opened an army information centre at the Jhigatala main gate to help relatives of the ones found dead or missing.
Following a government order asking the fleeing BDR jawans to report for duties within 24 hours ending at noon today, some sepoys and lower tier personnel have got back to Pilkhana.
Most of them claimed they were on leave on various grounds and that they were not party to the mutiny.
The high-powered seven-member probe committee headed by Home Minister Sahara Khatun began work yesterday. It is to file report within a week.