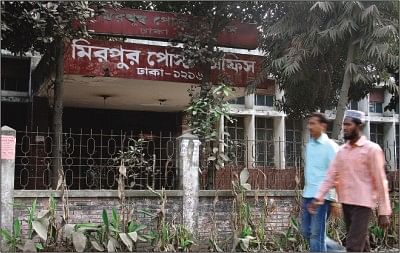 His fingers lingered on the computer keyboard like an elementary student getting his first lessons on a computer. Too bad, he is no elementary student. And too bad for the sixteen odd people queued before him to deposit the charges for driving licences and other car related documents at the Sub Post Office in Mirpur 2.
With each tapping noise he made with his fingers amid the awkward pauses, the queue of people expectantly tilted their heads forward hoping that the line would move forward.
But it did not. And when the queue finally did move, it took an agonizingly long time.
"I have been standing in the queue since 10:00am. And now it is 12:30pm," said Mahbubul Alam, a resident of Mirpur who was waiting with his car licence.
"I have been on this spot for over half an hour now. Anyone barely moved in the meantime. I almost feel like my legs have grown roots," he said, "what on earth is he [the clerk] doing in there! Why is the queue not moving forward?"
It was not before 1:30pm when a sweaty, visibly tried Alam finally came out of the post office.
"There were only about 14 people in the queue when I came here in the morning. Who would have thought it would take over three hours to get the job done! At least I did not," he said. "It is not a very complicated process either that it would require so much time."
According to the postmaster, there is only one computer and one clerk to process the documents and receive money for licence and car tax related jobs.
"We lack manpower and logistics. If we had another computer in this booth, things would have been much more smoother. The customers would benefit greatly," he said.
Some of the payees waiting in the long queue alleged that a peon takes documents in exchange for bribe and hands it over to the counter for fast processing.
"The main reason we have to wait so long is because the clerk at the counter receives only one document from the people in the queue and probably two from people who are not even standing in the line," said Sazzad Hossain, who came to pay the licence charges.
However, the post office authorities denied the allegation.
Shahrier Hossain, another Mirpur resident told this correspondent that he has been waiting for around an hour to get his letter registered.
"I came here right after 1:00pm and found the counter empty. After waiting for some time, she finally came in and told me that I have to get a seal on my letter before coming back to her registration counter," he said.
"I had to linger around to get an envelope, get the letter signed and sealed in three separate counters. And I had to wait for over an hour to get the job done as the clerks were out for lunch," said a visibly annoyed Hossain.
Moshiur Hossain, another client who came to post a letter alleged that he had to wait well over 20 minutes to get an envelope.
"I asked the person at the counter for an envelope and then suddenly found she was not there. It was over twenty minutes later when she finally came back and handed me an envelope," he said.
"The post offices are possibly the best examples of procrastination in providing services at government offices," he said. "I myself am a government employee. And I would never make a client wait while I enjoy my lunch."
"If I see a colleague out somewhere and see people waiting for him, I would do my best to help the client in the absence of my colleague. This is common etiquette, and these people seem to lack that," he added.
According to the postmaster, all the post offices in the city would soon be digitalised and computers would take over manual methods. This would speed up the job at post offices.
"It is only a matter of a few months when computers will be brought in to smoothen all the processes," said the postmaster.
However, regular post office goers expressed doubts about the concept of computerising the post offices. "If they cannot computerise the GPO (General Post Office) in all these years, how can they bring technology in such a sub post office," said another client.