Electronic billboard that hinders study at a school 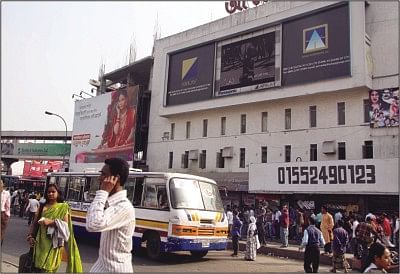 Afia, a student of Tejgaon Government Girls High School, was attending her mathematics class sitting beside the window. While simplifying a differentiation of calculus suddenly she looked out of the window. Outside an electronic billboard was displaying the music video of her favourite song.
For a moment Afia forgot about the math and started watching the video until the teacher noticed her distraction and asked her to get attentive.
“This kind of situation is very common in our school. For a long time we are going through this problem. It is creating noise pollution in the whole area and hampering the academic environment in the school,” said Khaleda Ahmed, a senior English teacher of the school.
“It is a problem especially while taking the science, math, physics and chemistry classes,” said a science teacher of the school. Students and teachers in the classrooms near the billboard are suffering the most.
“We are unable to shift those classes because we do not have sufficient classrooms,” said Khaleda.
Sometimes they display indecent things or videos not suitable for schoolchildren, said teachers.
Snigdha, a student of class 10, said, “Sometimes students start dancing sitting in the class with the music when the teacher is not there.”
“Sometimes students keep on looking at the screen for their favourite music videos. Girls often come out in the veranda during gaps between classes to watch the big screen TV,” said Khaleda.
“We even had to issue warning to some girls because of this,” she added.
“We informed the Tejgaon Police Station several times about the problem. When we inform them the TV remains shut for some days and after that they turn it on again. So now we have stopped submitting complaint. Last time we lodged complaint in March 2008 before the SSC exam,” she said.
Officials at the Tejgaon Police Station said they have nothing to do with the electronic billboard since it is under Dhaka City Corporation (DCC).
Asked about it, Commander Maksud, chief conservancy officer of DCC, said that they can take action regarding the billboard if they get any complaint from the school authorities.
“Till now we have not received any written complaint from the school. We shut down the electronic billboard at Shahbagh after we received complaint from Dhaka University students and the National Museum. If we get a complaint from the school then we will definitely investigate the matter and take action accordingly,” he said.