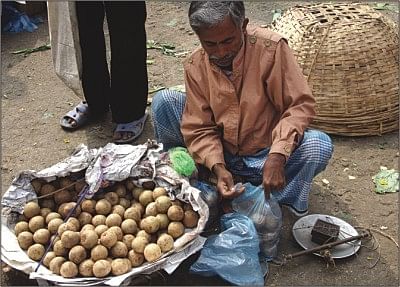 Besides kitchen markets, polybags are widely used by the vendors in the city. The picture was taken from Karwan Bazar yesterday.Photo: STAR

Production, marketing and use of hazardous polythene bags continue in the city at an alarming rate despite a government ban in force.
The banned bags are sold and used openly at all kitchen markets, grocery shops, street-side hawkers' market because of lax monitoring and absence of mobile court drives.
Polythene bags can easily be purchased at any wholesale packet store of the city. At Karwan Bazar 1 kg polythene is sold at Tk 100-120 while a single polythene bag would cost Tk 1-2. After the ban was imposed six years ago, manufacturers only changed the shape, size and colour of the bag to continue the business.
Majority of the polybags found in the market are recycled from discarded polythene bags, which is thicker in texture and even more harmful to the environment.
The main production area and wholesale market of polythene bags include Lalbagh, Chwakbazar, Begumbazar, Mukimkatra, Nimtoli, Debidash Lane, Imamganj, Islambagh, Sutrapur, Shyampur, Kamrangirchar in old part of Dhaka, which cater to the retailers. A huge chunk of the production also goes to places outside the capital.
“We just give what our customers want. It is easier to use polythene than paper packets or jute bags. No one usually come to raid us,” said one fish vendor at Karwan Bazar. Like him most of the kitchen market vendors use the polybags openly.
Environmentalists say the campaign against use of polythene should be restarted before it goes back to its previous status.
Abu Naser Khan, convenor, Environment Protection Movement said, “A level of awareness was there among the general people even a few years ago. Absence of government initiative and follow-up campaign during the past few years can be noticed. Besides, the government failed to promote an alternative item of polythene.”
Producers have built up an unholy syndicate together with the law enforcement agencies making it difficult to tackle, he said.
Mustafizur Rahman, the newly appointed director of Department of Environment (Dhaka Division) said fresh drive would be taken to root out polythene menace. However, the department faces a number of obstacles, which hinders its action against the illegal producers.
“Main obstacle is that most of the factories are located in old Dhaka. Conducting a raid often becomes difficult in the area because of too many nooks and crannies. Finding the factories requires more manpower”, he said.
“Besides, the gadgets they use are often portable. Sensing raid the producers can easily escape with their equipment”, he added.
Polythene shopping bags were introduced in Bangladesh in 1980s, which quickly replaced the use of traditional jute bags in every households of Bangladesh.
It was reported in the early 2000 that every day nearly 10 million polythene bags were disposed of by Dhaka residents. The discarded non-biodegradable polythene bags have wrought havoc on city sewerage, causing a serious adverse effect.
On January 1, 2002, the government imposed a ban on the production, marketing and use of polythene in Dhaka city (bellow 100 micron thick) that was followed by a nationwide ban on April 8 of the same year.
The only exception was made for the packaging of 14 items, which include biscuit, chanachoor, bread, salt, vermicelli, medicine, flour, naphthalene, fertiliser, chocolate, milk powder etc. However, polybag produced for these items must be above 100 micron thick. The law is also lax for export-oriented polythene production.
Under the Environment Conservation Act 1995 punishment for manufacturing and marketing polythene shopping bag is 10-year rigorous imprisonment, or a maximum fine of Tk 10 lakh, or both. Only Environment Court can hand down this punishment. The fine for using polythene shopping bags for purposes other than export trade is Tk 500.