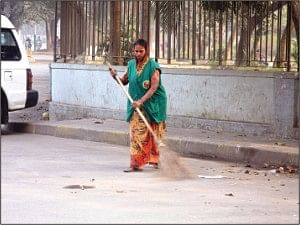 A DCC cleaner sweeping a street in Hare Road area at around 3 in the afternoon.Photo: STAR

If you are having a stroll or on way to your office in the morning, there are chances that you would see plumes dust trailing the broomsticks of cleaners working on the street.
It's nice to see the men and women in green DCC uniform with their broomsticks early in the morning -- a time when the city streets are reasonably free. But it is a totally different matter when the sweepers do their jobs at unduly late hours.
"It was around 10:30am the other day when I was walking on the pavement in Rampura. There was a cleaner sweeping the street and there were clouds of dust all around him," said Rafiqul Alam, a resident of Rampura.
"The cloud of dust made my eyes burn. For a few minutes I could not see anything," he said. "I could not stop myself from asking the question: aren't the cleaners supposed to clean the streets early in the morning? What was he doing sweeping street this late?"
Alam is right. The guiding principles of the DCC say sweeping of streets and public areas should be done within 6:00am. And collection of the trash should be finished by 7:00am.
However, DCC officials admitted that the schedules apply only to the VIP areas.
“We aim to finish the cleaning jobs and collect trash from the VIP areas by 7:00am. However, taking care of other city areas usually takes longer and may stretch up to 10:00am depending on the location,” said an official at DCC's Conservancy Department.
And so the city dwellers continue to suffer. They say DCC sweepers spoil their commutes in city streets by doing their job at untimely hours.
DCC cleaners are seen sweeping city streets as late as 10 or 11 in the morning in places such as Malibagh, Karwan Bazar, Farmgate, Tejgaon, Bashabo and Bangla Motor.
Mushfiqul Hossain, a student from Uttara, said "Quite often on my way to the class, I see sweepers doing their jobs as late as 9:30 or 10:00 in the morning".
Doctors say dust can be harmful to the human body, especially to people who have asthma and breathing problems.
"Dust particles overpower human body's defences and build up in the respiratory systems. This can harm lung tissue," said Dr Iqbal Karim, a private practitioner from Green Road.
"Dust may irritate the lung and trigger allergic reactions as well as asthma attacks. People who already have respiratory troubles may also have serious breathing problems from these attacks," he said adding that dust can also cause wheezing, runny noses, chronic breathing and lung problems.
Dhanmondi residents allege that DCC cleaners spoil their morning walks by doing their jobs at untimely hours. They say the cleaners sweep the Dhanmondi lakeside walkway between 7:30am and 8:30am when scores of people go to the lakeside for morning walk.
"We are here to keep fit and stay healthy but these sweepers turn out be the spoilsports," said Jamshed Chowdhury, 54, who looked red and sweaty due to the coughing fit.
"It is not only the morning walkers are affected. As this is the school opening hours, a lot of schoolchildren are also inhaling dust and other toxic particles because of this untimely sweeping," said Abdur Rahim, a resident of Dhanmondi 8/A.
DCC officials blamed the cleaners for not doing their jobs at the scheduled time. "It is difficult to supervise these workers especially with their sheer number and the number of areas needed to be covered," said an official concerned from the DCC zone-5.
"Once in a while we do take measures to raise their [sweepers'] work standards, but it dwindles afterwards because of the absence of proper monitoring," he said.
The cleaners blamed each other for not doing their jobs properly.
"I, for myself like to get over with the job as early as possible. But most others tend to waste time dillydallying their jobs," said Karim Ali, a cleaner at Dhanmondi.
"In other countries, it is mandatory for the cleaning staff to sweep streets before sunrise. However, in our country, they do not seem to give a damn about the convenience of people," said Abdur Rahim, a Dhanmondi resident.
According to DCC sources, their conservancy department has 7,156 cleaners for street sweeping along with waste collection and disposal activities.