Construction of all but one at Mahakhali hits snag 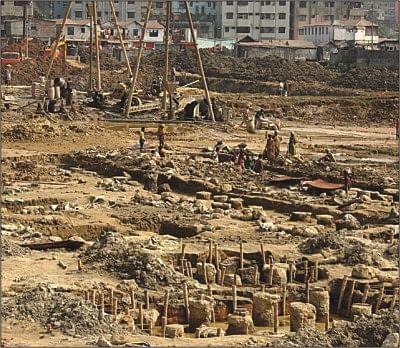 Construction of the kitchen market in progress at Mahakhali.Photo: STAR

Construction of the proposed wholesale kitchen markets by Dhaka City Corporation (DCC) in the city faces further delay, as land acquisition in three locations could not be completed yet for multiple reasons.
Land preparation work of the Jatrabari, Lalbagh and Aminbazar wholesale markets could not begin even one and half years after the project approval, sources in the DCC said.
The construction work of the markets was expected to start in December 2007.
The four markets were planned to set up at Mahakhali, Aminbazar, Jatrabari and Lalbagh with a view to introducing improved market monitoring system and ensuring better supply and distribution of agro-products to the city kitchen markets.
It was decided in November 2007 that the wholesalers and retailers of Karwan Bazar, the largest kitchen market in the country, would be relocated to Mahakhali to free the second most important commercial zone of the city from unwanted chaos.
The construction of the markets and the shifting of Karwan Bazar wholesale market is scheduled to be completed by December 2010.
Among the locations, work of the Mahakhali wholesale market near the inter-district bus terminal saw some progress. Land development work has been completed. Currently piling work is going on, DCC officials informed.
The Jatrabari plan to acquire private land hit major snags, said an official of the DCC requesting anonymity. A writ petition in the High Court was lodged over the ownership of a part of the land planned for the market.
The proposed khas land for Lalbagh market near Buriganga River is still occupied by slums. DCC officials cited the complication in land acquisition process due to 'confusing' land record as the main cause of setback. Flaws in drawing the respective holding nos are delaying acquisition, they added.
Bangladesh Agricultural Development Corporation (BADC) is yet to handover part of the land at Aminbazar delaying the project there.
The BNP-led government in 2004 decided to construct four kitchen markets in the capital to speed up supply and marketing of agro products and reduce price gaps in different kitchen markets. It was planned to introduce a monitoring system to protect consumers' interest.
In October 2006 the Executive Committee of National Economic Council (Ecnec) approved a Tk 206-crore project to construct the four markets and move the traders from Karwan Bazar.
The budget was later revised and increased to Tk. 330 crore.
Mahakhali market will be set up on 7 acres of land acquired from Roads and Highway Department while the one at Aminbazar will be built on 12 acres, Lalbagh on 9 acres and Jatrabari on 5.27 acres.
The DCC is planning to house about 2,500 shops in the four wholesale markets.
The largest market at Aminbazar to have 1100 shops while the other three markets at Jatrabari, Mohakhali and Lalbagh to contain around 450 shops each. There will be multistoried buildings in the markets. Floors of these buildings will be distributed after categorising the merchandise, officials said.
Currently, there is a total number of 1,782 shops at Karwan Bazar. The authorities plan to rehabilitate all of them almost free of charge.
DCC Chief Engineer Colonel Md Ashfakul Islam told the Star City, “Before the writ petition is resolved we cannot do anything at the Jatrabari spot. The Lalbagh land will be acquired soon and the matter of mapping flaws is almost removed.”