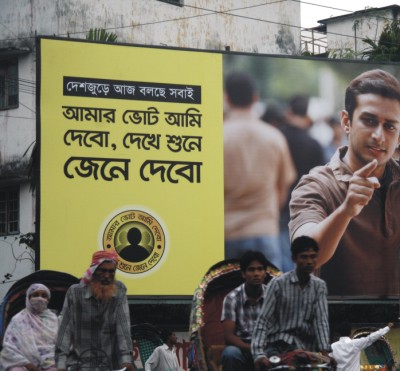 That is how to vote. Photo: Naeem Mohaiemen

7:35 AM. My mobile phone alarm goes off. Normally I swat it aside like a fly, but today I jump. It's the day. Abba/Amma have already had a full breakfast. They're so disciplined compared to me. My father is old school, he insists we get to the centre before 8. I run with an empty stomach
7:50 Crossing Dhanmondi 2, we run into the imam of the local mosque. He knows my father is an early riser. "Are you going now, I will come with my bibi in a bit."
8:00 We arrive at City College punctually. But, hmm, looks like everyone else had the same idea, only half an hour earlier than us. The lines are long and snake around the corner. On women's line I spot Khushi Kabir (Nijera Kori), on men's line Anisul Hoque (Prothom Alo). Bujhlam, they're my neighbours in Dhanmondi.
TV cameras, international observer cars and security. I wonder why so many cameras. Kromosho prokash …
Line is stuck, no sign of movement. Wish I had grabbed that breakfast. I leave dad to save my spot, and go and buy newspapers. Prothom Alo, Shamokal, and Naya Digonto. May as well see what all sides are saying today. As I get back in line, I get a stern: "Excuse me brother," from the man behind me. "Ini amar abba," I point to the moustache, and get back in.
People are starting to chat with their neighbours. All sorts of topics. But not who are you going to vote for. It's more about logistics. People are comparing their pieces of paper. One guy is having a fit, why is his paper a different size. Thing is, many people received voter ID numbers on papers from local political party representatives -- hence the paper sizes.
The National ID Card is source of much confusion. "You mean I won't need this?" No, just your voter number. "Then why did I need to get this ID card? They took my fingerprint and blood group." Well, I suppose it will be useful one day. One man grins and says: "I don't care what you all say, I'm not losing my National ID, I will get to America with this card. Hmm…
9:00 Now we understand why the cameras are here. A motorcade with SSF security guards leaves the centre. As I learn later, Sheikh Hasina has just voted in this centre.
9:05 With security detachment gone, suddenly the line moves at lightning speed. A hundred of us are allowed inside at one go. This creates a bit of chaos on the main floor, because no one knows where to go. There is a men's and a women's building, but it later turns out that a segment of the male voters need to go to the female building too.
But today I have vowed not to complain about these small inefficiencies. Shob shoye jabe. Just want to get back to democracy you know? No more detours.
We're on the right line now, and through the window of the voting room I can see the polling officer, the voting booth, the works.
9:10 A man on our line is complaining. He's annoyed that a nearby toilet is befouling the air. The Ansar on duty is quite mild mannered and helpful, but the man won't be calmed. Dude, I think to myself, be happy you're able to vote. Don't sweat the small stuff. Nawabjada kottheke esheche?
9:25 My father is in and out in a jiffy. He's always been about running the trains on time. I follow him. Bring out my National ID. "Ota lagbe na." Already a ballot is in hand and I'm being shown the booth. So quickly, I'm not ready yet! A bit anti-climactic.
Did I mention I'm a first-time voter. I was out of the country in 2001.
9:35 I stamp and press for good measure. Start folding it up into a small folded document. As I come out, I hear someone getting instruction: "Fold it length-wise." Oh! I unfurl and start folding the other way. "Na, never mind, jebhabe korechen shebhabe dhukan. No double fold." Khaise. Visions of "hanging chads" dance in my head.
9:40 I join my father and head home. "You voted very fast," I say.
"At this age, it doesn't take much time to decide."
"So who did you vote for?" He smiles (and refuses to tell me). But I suppose I can guess. People talk about parental influence on children. I imagine that I have flipped the script.
9:45 Amma is already home. She's upset. They were unable to find her voter number, even though she showed her National ID Card. Oh oh. "Ki ekta jhamela." My father says she can sort it out later. "Yes, but I can't vote later."
Well, well, all this is different. My household unit didn't care much about the vote in the past. Not quite a communist no-vote stance, more of a resigned cynicism. "They're all the same," my dad used to say. His skeptical antenna is intact, but at least he's become re-engaged in the political process. Me too.
That's one valuable thing to come out of the last two years. We value democracy and our vote a lot more. The Singapore, Burma, Turkey model were rejected by the people. No alternative to elected democracy, messy and troublesome as it is.
The next five years will be interesting.

Naeem Mohaiemen is a member of Drishtipat.