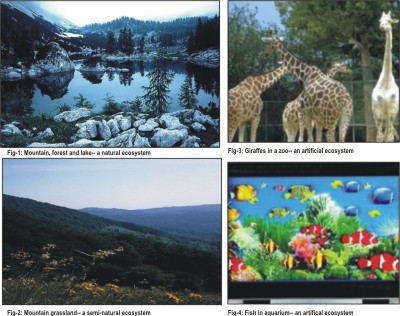 Ecosystem is defined as "the total physical, chemical and biological conditions surrounding the organisms (including the organisms themselves) of any area of the earth".
An organism's environment is everything altogether -- all other organisms and non-living and physical materials around it somehow influence it. Each and every element of its environment is its amenity. The organism and each amenity (living and non-living) of its environment are interlinked, each one is in some way dependent on others, and the invisible super power "Nature", in a perfect calculative way maintains the balance among all these elements. Such a complex system of interactions and network is called the "Ecosystem", for example, aquatic ecosystem (marine, brackish & fresh water ecosystem), terrestrial ecosystem (forest, grassland etc.). In each ecosystem, the land, water and air, which serve as the sources of amenities, are fixed and limited, and so has a limited carrying capacity.
Now the terms natural, semi-natural and artificial ecosystems. "Natural ecosystem" means an ecosystem not perceptibly altered by humans. "Semi-natural ecosystem" means an ecosystem which has been altered by human actions, but which retains significant native elements. An artificial ecosystem is a man-made system of plants, animals, and people living in an area together with their surroundings.
In natural and almost natural ecosystems the actual and historical role of man in the functioning of the ecosystem is nil or almost nil. Species composition and species numbers are uninfluenced --no by exploitation, no game-hunting, even no indirect way: for example any changing of watercourse. Geomorphologic, ecological and biological processes are almost undisturbed by man, large predators can fulfill their life-cycle. In this category also fall the almost natural ecosystems, in which the ecosystems are only very marginally exploited by man. Examples are the highest parts of the mountains, undisturbed parts of seas, lakes, rivers, tundras, raised bogs, and primeval natural forest-ecosystems.
It is known that undisturbed, natural ecosystems are the best guarantee for preserving biodiversity, richness of species -- including endemic, threatened, resource and flag-ship species -- and also other natural values (Sobolev et al., 1995). The preservation of natural ecosystems with as less human influence and management as possible is in a lot of cases a very efficient way to maintain the biological diversity and protect species. Natural processes such as sedimentation, erosion, aquifer recharge/discharge, hill slope processes, inundation, and grazing can have a diversifying effect on nature itself and should be allowed as much as possible. Moreover, undisturbed ecosystems (“natural” ecosystems) have a large nature conservation value in itself: they make it possible to watch nature in its purest form, and conduct scientific research on species and processes that are rapidly diminishing.
Semi-natural ecosystems may range from unaltered species composition to just using the natural background-soil and/or water by man. In the strictest sense, the species composition is unaltered by man -- no species introduced or planted by man. Soil- and water-management are unaltered, but man has to a limited extend influenced the natural processes, for example by taking over the role of natural grazing through extensive mowing or by taking over the role of great predators by fishing in great waters.
These ecosystems do occur also in natural situations, but then they are limited to areas where natural grazing, erosion by rivers or streams, reverse the natural succession to earlier stages, or prevent the natural succession. These ecosystems are rather complex (different trophic levels are still present) and can be very rich in species numbers, if the human use has been stable for many years. Almost all ecosystems resulting from “traditional“ forms of agricultural land use as steppes, puszta's and wooded meadows fall in this category. In figure-2, Arnica Montana (a grass) is seen grown well on the mountain slopes with human agency.
In these situations there is a high degree of sustainable use. Sustainable use means the use of an organism, ecosystem or other renewable resource at a rate within its capacity for renewal.
If humans change the species composition, keeping at least some native ones, use the natural soil and water conditions, the system may still be called a semi-natural ecosystem. Practically most forest and water bodies of Bangladesh have turned to semi-natural ecosystems.
An artificial ecosystem is a human made system of plants, animals, and people living in an area together with their surroundings. Zoo parks often create artificial ecosystems by placing animals in human-made areas similar to their natural habitat. People can also create lakes in the middle of desserts and keep penguins in warm climates, but only if they create an artificial ecosystem. Even a spacecraft can contain an artificial ecosystem (like an aquarium), but such ecosystems have almost no value except for exhibition and studying a bit of ecology.
Even after much attempt, human population growth is yet to be arrested successfully in the countries where this is most needed. Consequently, natural ecosystems are dwindling everywhere, even in oceans! So managing wisely the semi-natural ones should be the second best choice for humans. We should shun importing and transplanting alien species as much as possible and fight against even 'unintentional introduction'; rather appreciate mostly the indigenous species composition and nurture as much diversity as possible.

Abdus Sattar Molla is a PhD researcher in NIE, Singapore. Can be reached at asmolla1@yahoo.com.