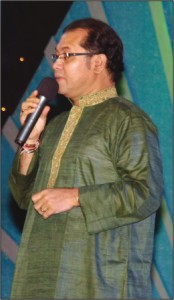 Seasoned artiste Subir Nandi has won the National Film Award for "best playback singer (male)" for the year 2004. The song, Bhalobashi shokaley, is from the film Megher Porey Megh (directed by Chashi Nazrul Islam and produced by Impress Telefilm Ltd). Emon Shaha is the music composer and Gazi Mazharul Anwar is the lyricist of the song.
National Film Awards for the last four years were announced recently.
About the award-winning song, Subir Nandi says, "Gazi bhai's songs are always of a certain standard, so I agreed to sing it right away. Emon Shaha's treatment of the song was rather unusual considering the ongoing trend in film music. He had a minimalist approach to the use of musical instruments. The composition has the feel of film songs from yesteryears."
Prior to this, Subir won National film awards in 1984 for the song Amar e duti chokh (from Alamgir Kabir's film Mahanayak), in 1986 for a comprehensive performance in Chashi Nazrul Islam's film Shubhoda (lyrics by Mohammad Rafiquzzaman and music direction by Khandokar Nurul Alam) and in 2002 for the song Ekta chhilo sonar konya (from Humayun Ahmed's film Srabon Megher Din; music direction by Maqsud Jamil Mintu).
Subir's reaction to the award: "Any kind of recognition or appreciation encourages an artiste. A nod from the state is the highest honour for a performer. All the films and songs that have received awards this time give us hope that better days are ahead for our filmdom. And every award-winning accomplishment is teamwork.”