Quality science education a must for prosperity 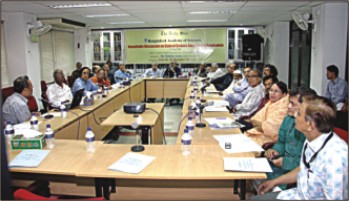 Participants of a roundtable on the state of science education in Bangladesh held at The Daily Star conference room yesterday. The discussion was jointly organised by The Daily Star and Bangladesh Academy of Sciences. Photo: STAR

The country has no alternative to using science education as a tool for improving the living standards of the people and for dealing with the economic and environmental challenges it faces, experts said.
Alarmed at the decline of the quality of science education and student enrolment for it, key scientists and educationists of the country yesterday stressed the need for sensitising the government to allocating a larger budget for the sector to enhance teachers' capacities and update the curricula.
Science textbooks need to be simplified, teachers' salaries need to be raised, and science graduates need to be motivated to become teachers, said speakers at a roundtable titled 'State of Science Education in Bangladesh', jointly organised by The Daily Star and Bangladesh Academy of Sciences (BAS), which was held in the conference room of the newspaper office in the capital.
The speakers also suggested introducing a terrestrial television channel dedicated to broadcasting educational programmes, saying the move will help both teachers and students by reducing the latter's dependence on private coaching centres.
BAS President Prof M Shamsher Ali, who is also a renowned educationist, chaired the event where four keynote papers on related topics were presented.
Scientists at the discussion identified weak curriculum and textbooks, weak teaching and assessment methods, lack of properly trained teachers and laboratory facilities, poor salaries of the teachers, and students' sliding interest as some of the main reasons for qualitative and quantitative decline of science education.
They underscored the need for recruiting quality teachers and building capacities of the existing ones through tele-education using ICT based materials, for resuming the government's stalled PhD programmes, and for organising science weeks and science fairs.
"One needs private coaching to study science in our country. Only the affluent can afford it because it is expensive," said Dr Zafar Iqbal who presented a paper on 'Quality of teachers and facilities available for science education at the secondary and higher secondary levels'.
Only a small fraction of students get the chance to study medicine and engineering or even to study in universities, he said adding, "Commerce, on the other hand, is a lot easier to study and to get good marks in. One can get into a BBA programme which has a lot of job opportunities."
About 10 percent of the good students switch to commerce, he said.
Saying that science textbooks are 'terrible' in the country, he noted that a student cannot understand the materials on his or her own, and sometimes even the teachers do not understand, and they do not teach properly in classrooms.
The textbooks fail to fire a spirit of inquiry, Prof Shamsher Ali noted, as he presented a keynote paper on 'Government policy on science education and what the government should do'.
Proposing formation of a commission for recruiting teachers for appointments, he said, "To attract science graduates to science teaching, we need to formulate a policy that will ensure jobs for them with handsome salaries."
Currently there is little motivation to become a teacher while social status of teachers is declining, the speakers observed.
Jamilur Reza Choudhury, vice-chancellor of Brac University, said the national budget allocation for education in 2004 was only 2.3 percent of the GDP while Unesco recommends an allocation of a minimum of 5 percent.
While presenting a keynote paper on 'Science education at secondary and HSC levels', he suggested scholarships for young faculty members for higher studies and research, and making science compulsory at the secondary level.
A total of 2.64 lakh students appeared in SSC exams from science group in 2001, but the number dropped to 2 lakh in 2006, although the total number of SSC candidates increased, Prof Mohammad Kaykobad of the Department of Computer Science and Engineering at Buet said while presenting his keynote paper.
While 1.26 lakh students appeared in HSC exams from science group in 2001, the number dropped to 82,199 in 2006, he added, as he presented a paper on 'Status of science education in Bangladesh'.
Globalization and the role played by multinational companies in the changed scenario are contributing a lot to the introduction of more business oriented courses and the shift to commerce studies from sciences, the speakers noted.
Stressing the need for bringing back science education to the mainstream, Mahfuz Anam, editor and publisher of The Daily Star, suggested organising a national science convention, and similar events at district levels.
"The future economy will be science based," he said underscoring the need for finding scientific ways to tackle the impact of global climate change.
Science curricula must be need based and students should be encouraged to scientific ways of thinking, the speakers stressed.
They stressed the need for coordinating the SCC and HSC science curricula, so students are prepared enough to tackle higher level of science when they enter colleges after graduating from high schools.
They also suggested better coordinated science curriculum at every level of the education system.
"There is no calculus in HSC first year mathematics courses, although science students need to study calculus to understand physics courses," said Sushanto Kumar Sarker, an associate professor of physics at Notre Dame College.
The Math Olympiad model can be replicated to attract students to physics, chemistry and biology, the speakers suggested.
"Maths should be made compulsory for science students," Dr Mohammad Ali Asgar of the physics department at East-West University said.
The immediate past BNP-led four-party alliance government abolished the Education Equipment Bureau, an Asian Development Bank financed body which used to provide modern science equipment to educational institutions, Shamsher Ali said.
National Professor MR Khan said, "The science policy has been gathering dust for six years."
Prof Jamal Nazrul Islam of Chittagong University, BAS Secretary Naiyyum Choudhury, former VC of National University Aminul Islam, Shamima Karim Chowdhury of DU, and Mesbahuddin Ahmad, dean of post graduate studies at Gono Bishwabiddalay also spoke.