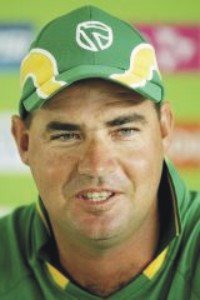 South Africa coach Mickey Arthur cannot wait for his side's Test series against England to get underway at Lord's and start what he hopes will be an historic campaign.
Thursday, weather permitting, should see the start of a four-Test contest with South Africa bidding for their first series win in England since their return from apartheid-enforced isolation.
Five years ago, on their last visit to England, the Proteas were 2-1 up heading into the final match of the series only for England to win by nine wickets at The Oval.
In 1994 the series in England between the two sides ended all square while in 1998 England, after a poor start, emerged as 2-1 winners.
It all added to the impression, reinforced by their dramatic exit in the 1999 World Cup, on a tie against eventual winners Australia, that South Africa were 'chokers', one of the cruellest taunts that can be levelled against any group of sportsmen.
Indeed, former South Africa fast bowler Allan Donald told the Observer newspaper here Sunday: "We have always been labelled as 'chokers' and it is a horrible word.
"But we really messed it up when we had chances to put teams away. I suppose, being dead honest, we have choked."
But Lord's, where in the corresponding Test in 2003 Graeme Smith, then as now their captain, scored a double century during a crushing innings win, has proved a happy hunting ground for South Africa on their recent visits.
Now, boasting an impressive pace attack led by the in-form Dale Steyn, hopes are high amongst the tourists that they can become the first South Africa side since 1965 to win a series in England when batting great Graeme Pollock's masterful hundred at Trent Bridge set up the decisive victory in a 1-0 triumph.
Arthur, after seeing the final day of a three-day tour match against Middlesex at Uxbridge in the London suburbs washed out with a ball bowled Sunday after both sides made over 300 in a high-scoring draw, said: "There is a special buzz.
"This is one of the tours we've been talking about as a group ever since the planning started two years ago."
The Middlesex match was Smith's first since tearing his hamstring in the Indian Premier League and, ideally, he would have like more than the two hours of batting he got before being dismissed.
However, an excited Arthur said all members of his team had had sufficient preparation. "I'm pretty sure we've done the work we need to have done -- and I'm confident we're right now.
"You can feel in the dressing room the boys are ready for the Test and just want to get cracking in the series now.
"We're counting down the hours; I wish it was starting in two days' time -- that is how ready I feel we are as a group.
"Each day is delaying it. We just want to start playing now and get our teeth into the series."
In April, South Africa drew a three-match series in India and this upcoming contest is the second leg of a tricky trio of overseas trips which culminates with a clash against world number ones Australia.
"They don't come much harder than that as three tours in a row," Arthur said. "We needed to get a team ready for that, and our process started about two years ago.
"I'm really confident we've put together a really competitive side."
Arthur is particularly excited by the Proteas' pace attack. "I think the sight of Steyn and Morne Morkel is going to be something special this summer."
He added: "South Africa have never won in England since unity, so it is something we've put pretty high on our agendas."