Citizenship debate comes to end but doubts and worries remain 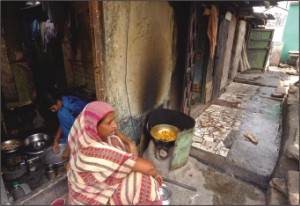 GENEVA CAMP: High Court ruling has granted the Biharis citizenship. But will it change their life and living?Photo: STAR

Biharis residing in camps are in a fear of eviction and uncertainty after the High Court on May 18 granted them citizenship, ending a long-lasting argument over their status.
The Urdu-speaking people at the Geneva Camp in Mohammadpur and Benaroshi Palli in Mirpur are now confused whether they will lose the refugee status that ensures guaranteed housing, free water and electricity for them.
The younger generation sees new hopes in the court ruling but doubts remain about their future. Older generation of Biharis still considers Pakistan as their home country.
"This has been my home since I moved here as a boy in December 1971. Where will I end up after this?" said Mohammad Jasim, a resident of Geneva Camp. “I don't have any property anywhere or a secured income source to rent a place in this city.”
On a writ petition, the High Court (HC) last week ruled that about three lakh Biharis living in different parts of the country are citizens of Bangladesh. The court also directed the Election Commission (EC) to include the petitioners' names in the voter list.
The petition was filed on November 26 last year by 11 members of the Stranded Pakistanis Youth Rehabilitation Movement seeking HC orders to register as voters the Urdu-speaking people living in 116 camps in the capital and elsewhere.
According to a survey conducted by the United Nations High Commissioner for Refugees (UNHCR), there are around 250,000 to 300,000 Urdu-speaking people in Bangladesh. Of them, around 160,000 are languishing in camps.
The survey also reveals that some 50,000 to 52,000 Biharis are living in 30 camps in Dhaka. Of them, around 20,000 to 25,000 live in the largest camp, Geneva Camp.
Without citizenship the community did not have the right to vote, own property and travel outside the country. They have very little access to resources and employment. They lack proper schooling and healthcare facilities.
“My father and uncles were highly educated men but I am a complete illiterate. I can hardly spell my name,” said another camp-dweller Mohammad Iqbal. “At least I have a place to stay in this camp. How will I survive outside, if evicted?”
Majority of the Biharis do not have any skill to compete with the mainstream population in the employment market. Literacy rate is still very low among them.
Today there are only six primary schools for them in Bangladesh. One of them is for Geneva Camp dwellers run by Plan Bangladesh, an NGO. Around 100 children go there.
The community produced only two master's degree holders in the last 36 years. One of them recently obtained a degree on law from Open University.
Residents of today's Geneva Camp or camps outside Dhaka migrated to Bangladesh from Bihar, India, during the decades following the partition in 1947.
Many migrated fearing persecution during communal riots that occurred right before and after the partition that gave birth to two countries -- India and Pakistan.
During the Liberation War of Bangladesh, most of the Biharis rallied behind the Pakistani regime and collaborated with the occupation army.
After the end of the war, Biharis faced the wrath of newly liberated Bangalees. They were confined in various camps across Bangladesh along with the prisoners of war.
The government of Bangladesh later offered the community the choice of repatriation to Pakistan. In December 1973, International Committee of Red Cross completed registration of 539,669 persons who wished to return to Pakistan.
In the following years the country witnessed some important political events that shaped the future of the Bihari community. Many of them went to Pakistan while the rest have been living in the camps, searching for a place called home for the last 36 years.
The post-1971 generation who were born in Bangladesh have been waiting for a change of their status as the 'citizens of nowhere'.
Their living condition in the camps is inhuman. Broken toilets, dirty water, messy pathway and damp living quarters are part of their life.
Despite the HC ruling, worries remain about whether the mainstream population will accept the Biharis as they are. Maimunnisa, a mother of three, said, “Now that we are citizens here, we will definitely try to blend in with the mainstream. But will they accept us normally and let their children play with ours without pointing finger?”
Sadakat Khan, president, Stranded Pakistanis Youth Rehabilitation Movement and one of the petitioners to the HC, said, “This is a historic event. We endured immense sufferings in the camp. With citizenship it should be over. We hope to get our life back.”
"But the authorities should not evict the Biharis from the camps right now. They have been living in the camps for a very long period. Without proper arrangements for their rehabilitation and skill generation these people will not survive outside,” he added.
After the HC ruling, the question of returning the property that once belonged to the Biharis is now being debated. Neaz Ahmed who arrived at the Geneva camp as an 8-year old, said, “My family had everything before the war. We had a home and land here in Dhaka. But I will probably end up in a slum if we lose shelter at the Geneva Camp.”
Shoukat Ali, general secretary, Stranded Pakistanis General Repatriation Committee, said, “We respect the High Court ruling, but it is going to create a new chaos.”
“Our assets and liabilities were declared enemy property after the war and these are now occupied by locals. Without addressing the property issue it is not possible to ensure rights of the Biharis,” he observed.