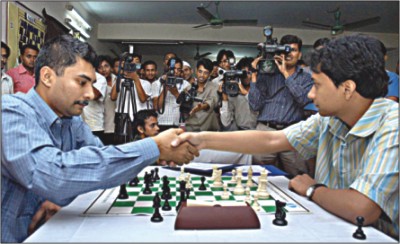 WELCOME TO OUR WORLD: Grand Master Reefat-bin Sattar (L) congratulates Enamul Hossain Rajib (R) who has just confirmed his assumption as the fifth Grand Master of the country. Rajib won his final round match of the National Chess Championship against Reefat to collect the required 10 points for his third GM norm at the Chess Federation hall room yesterday. Photo: Anisur Rahman

Country's new grandmaster of chess Enamul Hossain Rajib once again urged the Bangladesh Chess Federation to increase facilities for the chess players.
Rajib, who secured the third and final GM norm yesterday during the 32nd National Chess Championship, told The Daily Star that all chess players, experienced and the youngsters apart, face similar problems.
"The main problem is lack of private support. Our result is not bad considering the facilities we get. So we need sponsors to support us so that we can concentrate on our game," said the 27-year-old Rajib, whose first norm came at the 2002 Chess Olympiad in Slovenia.
Rajib, who sealed the second norm in Abu Dhabi last year during a GM tournament, enjoyed a remarkable 2007 when he reached the second round of the World Chess Cup in Russia in November with an upset victory against world No 19 Pavel Eljanov of Ukraine.
Rajib, who considered that success still as his greatest achievement, said he was happy to become the fifth GM after Niaz Murshed, Ziaur Rahman, Reefat Bin Sattar and Abdullah Al Rakib.
Rajib was dismissive of the thought that the number of GMs in Bangladesh was not enough.
"In Russia, China and India, there are plenty of GMs because they give their players top facilities. But if you consider the 140 countries that play chess, it is not bad. Most countries have one or two GMs. Even a top chess nation like Estonia has just two GMs.
"We get the chance to play only a few GM tournaments every year, that's why most of our players reach the top level late.
"Teams like Biman and Destiny support players and there are organisations like Standard Chartered but we need more," said Rajib, who plays for Destiny.
Rajib said that the federation should have their focus on training budding players.
"There is no talent hunting programme. The players have to work on their own initiatives. We need to have proper plans to groom them.
"It also does not need much fund or foreign coaches because we now have five grandmasters. All we need is the federation to be more active and use the local experts.
"We also need more preparation for big events, which we never get. It's not so easy to play chess in Bangladesh, because there's no governmental support, but still some players manage to develop and show good results.
"If we had adequate facilities, we would have had more grandmasters by this time."