A visit to “Daruchini Dwip” 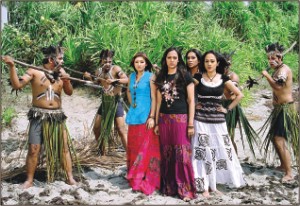 A scene from Daruchini Dwip

Based on a hugely popular book by Humayun Ahmed and directed by actor-director Tauquir Ahmed, Daruchini Dwip is soon to take part in a film festival in India. This would be an opportune occasion to go over the movie
The views contained in this writing however, are those of a layman and are therefore bereft of proficiency and devoid of technical jargon.
Resources, material and aptitude in which the country abounds, wait eagerly to be tapped and harnessed, Daru Chini Dwip is the result of this search. The drive for perfection is evident in most places and so is the teamwork. The story, the direction, the camera and the music add up to a situation where according to the gestalts the whole becomes more than the sum of its parts.
Humayun Ahmed's cap is not in need of ordinary feathers but one more would do no harm. Credit goes to him for the tightly interwoven plots and crisp dialogues, which characterise his writings. However there are some discrepancies, which lead to imperfection. For instance how does Abul Hayat's character, who himself is going through a monetary crisis, spontaneously offer money to Boltu? Where did this sum come from? How does the intimidating aunt, at a minor provocation from the prospective groom, set the decked up Jori free from bondage? There are few more instances, which will be mentioned later.
Hats off to the caressing wielder of the camera. The delicate elusive beauty of the deep blue sea -- frilled with white linings, the sand, the surf, the setting sun, the sound of the giant waves defy expression in words. Only those with poetic imagination can capture nature's endowment in this manner. The long shots are breathtaking. Sea lovers will store these memories in their dream caskets.
The juxtapositions -- fantasy to reality -- are smooth transitions resembling the modulation of a good vocalist's singing with full-throated ease. Tauquir Ahmed, the once heartthrob of teenagers, has now emerged as an insightful director, good luck to him and happy viewing for us in future.
The choice of Rabindra Sangeet, once again is flawless, Dolly Zahoor's lip-syncing to Amar mon kemon koray etches on her features not only her son's despair but also the futility of her own incompatible marriage, compliments to the singer and the actress.
A new generation of talented youngsters have joined the fold of the senior thespians. The teamwork is pleasing and successful. Though the former have much to learn, nevertheless their exuberance and optimism balance the latter's experience and expertise. Thus a talent hunt has really helped the media.
Bangladeshi viewers are sensitive and demanding. A little change here and there leading to fulfilment will satiate their craving for good cinema, which they as logic oriented filmgoers long for.
The last scene is a dirge, a disappointment. It seems that the filmmaker who gave us much hope, suddenly got tired and dozed off to rest. The Kamalapur Railway Station looks desolate and lifeless. Nothing moves! Where are the passengers, the tea and magazine stalls? Has Kana Baba's father along with a microbus and a ship reserved the platform too? Was he afraid that his son would jostle and mingle with the ordinary crowd and catch a cold? It is a challenging task to shoot such scenes but we pay good money to see our own films, don't leave us in a lurch. A content audience takes back haunting memories and dwells on them for days. That which began so well could have continued till the end. We hope for better luck in future and pray that more of our movies will take part in international film festivals and earn kudos for the country.
The writer is an educationist and social worker