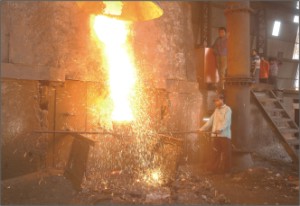 The high price and scarcity of raw materials have forced around 100 of the country's steel re-rolling mills to close in the past two years, with the loss of tens of thousands of jobs, according to industry leaders.
The crisis has been caused by increased global demand for scrap metal and the decline in the country's ship breaking business, one of the key suppliers of scrap to the local mills.
Steel re-rolling mills produce mild steel rod used mainly in the construction industry to re-enforce concrete.
“The sector doesn't get an adequate supply of raw materials from ship breaking industry so we have to keep our factories closed. Even if we sometimes get raw materials, the local price is exorbitant,” Masudul Haque Masud, general secretary of Bangladesh Re-Rolling Mills Association, said.
The price of ship scrap has doubled in the past two years to around Tk 50,500 per tonne in the local market.
Although the price of ship scrap can be higher than the imported one, the mill owners prefer to collect local scrap as it takes around three months to import scrap.
“The prices of breakable ships are rising and the ship breakers take advantage of the situation and hoard scrap to sell it later for excessive profit,” Masud said.
According to the Bangladesh Ship Breakers' Association (BSBA), only 3.70 tonnes of old ships were broken a 8 months of the current fiscal (2007-08), whereas 10.50 tonnes were broken in the 2005-06 fiscal.
“In the past we used to break between 10-12 ships per month, but we broke more or less 5-6 ships in the last three months due to unavailability of ships and sharp rise in the prices of ships in the international market,” a leader of the sector said.
Now the price of per tonne of old ship is $750 in the international market, but it was not more than $350 a tonne in 2005-06, he added.
A few days ago Sufi Mizanur Rahman, president of BSBA, told a seminar that the unavailability of breakable ships in the international market was due to China's massive involvement in ship breaking and growing environmental concerns about the industry.
“ We can import scrap but it takes around three months to import raw materials, which means a long time investment that many factory owners cannot bear, but it takes only one day to buy scrap from ship breakers,” Ali Hossain, president of Bangladesh Re-Rolling Mills Association, said.
He added that L/C margin and high interest rate remains another barrier to importing scrap.
“The duty stricture of the government is also very irrational, when the ship breakers have to pay Tk 1,000 flat duty against the import of per tonne of breakable ship, the re-rolling mills have to pay 10 per cent duty against the import of per tonne of scrap and melting scrap,” Ali Noor, managing director of Akbar Steel Re-Rolling Mills Ltd, said.
So, when ship breakers have to pay Tk1, 000 a tonne only, re-rolling mill owners have to pay around 4,600 for the same quantity of the same product.
They also blamed the US dollar price for the present bad condition saying that dollars have depreciated allover the world but it appreciated in Bangladesh.
“Due to the price hike of construction materials, the construction work reduced sharply, almost halving the demand for 40-grade MS rod,” said Ali Hossain
“Now the common trend is that people are not beginning new construction work. Now we are selling MS rod only to those who have initiated their construction work earlier and are now struggling to complete it,” he added.
Kawsar@thedailystar.net