Words that have made a difference 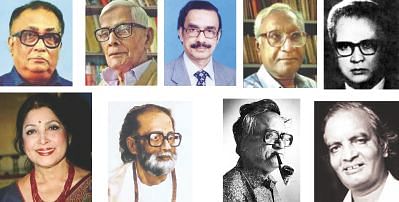 (In this first segment of a two-part article, the writer reflects briefly on some books that have had a seminal influence on the shaping of the modern Bengali mind, here in Bangladesh)
In these past many decades Bangladesh's writers have contributed enormously to the growth and sustenance of intellectual thought in the country. In this season of Ekushey and nationalistic resurgence, with all its promise of literary delight and political grandeur, why not go back, a few steps, into the past and recall the individuals who gave us the works that have shaped our thoughts not a little?
So, here we go . . .
Oshleshar Rakkhoshi Belaye
Smritipote Sheikh Mujib O Onyanyo
Syed Najmuddin Hashim
Syed Najmuddin Hashim (1925-1999) remains known as an illustrious man of letters in Bangladesh. His career as a civil servant in pre-1971 Pakistan and then Bangladesh in no way keep him away from the world of aesthetics. In this coruscating collection of essays, or thoughts if you will, Hashim reflects on men and matters he has come across. The essays cover much more than his take on politics, for he goes into a deep survey of literary as well as social trends in times which clearly were a defining moment for Bengalis.
In a very large sense, therefore, Oshleshar Rakkhoshi Belaye can be regarded as key to an understanding of the liberal Bengali mind, bringing within its ambit the various issues and ideas which underpinned the growth of Bengali political and social consciousness in a time span stretching from the 1950s and all the way up to the post-liberation period in Bangladesh. The work is also, in a number of ways, a reminder of what we may have lost over the years through the changing patterns of the seasons, in that figurative way of speaking.

***
Kritodasher Haashi
Shawkat Osman
If literature is fundamentally a driving of a message home, Shawkat Osman (1917-1998) does it well. His works were noted for the bitterness of their expression, for the poignant symbolisms they came in. In this work, which has been well translated into English as Laughter of the Slave, Osman throws up an image of raw, unbridled power at work. The slave does not laugh, even when he is commanded to. Absolute silence greets his tormentors and then torment them in turn.
The work is a protest against authoritarianism, an ailment which much of the Third World, Bangladesh in particular, has periodically suffered from. Osman demonstrates the power of resistance to dictatorial rule, that even in periods of intense darkness there is light at the end of the tunnel. The slave will free himself. He will laugh. And gods of clay will end up biting the dust.
***
Khoabnama
Akhtaruzzaman Elias
The imaginative faculty was strong, in that dynamic sense of the meaning, in Akhtaruzzaman Elias (1943-1997). And yet he wrote only two novels, the one in question and the other being Chilekothar Sipai. In both works, politics is the fulcrum around which the stories move. Khoabnama, the more critically acclaimed of the two works, is a tale set against the background of subcontinental history. It throws the principal characters into the vortex known as the Tebhaga movement of the early 1940s, a struggle that is truly reflective of mass desperation. And yet, as the peasants of Bengal hope that their struggle against the entrenched landlord class will yield victory, into the picture comes the deadly Hindu-Muslim communal divide.
The novel is a wrenching commentary on how a truly popular movement can sometimes be overtaken by political forces that throw up images of chaos, and then more of them. Elias takes readers all the way through the explosive conditions of the latter 1940s, weaving into his narrative the unbridled killing of Muslims and Hindus at one another's hands in the sordid summer of 1946. In essence, Khoabnama is sad history offered on the platter of literature.

***
Bangali Musalmaner Mon
Ahmed Sofa
Ahmed Sofa (1943-2001) had little patience with compromise. Life, he believed, was best lived when it freed itself of compromises and strategies. From that perspective, he was a free thinker and indeed his reputation as a man of letters rested on the liberalism he brought to his thoughts. It is through the prism of such a liberal philosophy that he examines the mind or call it the psychological make-up of Bengali Muslims. Sofa's premise is simple: a people who played so enthusiastic a role in the creation of Pakistan, thus contributing to the communalism that battered the subcontinent in the late 1940s, would within twenty four years would rebel against that very idea as the idea of Bangladesh began to take shape.
Ahmed Sofa analyses the rise of Bengali nationalism in the 1960s and examines it in correlation with the Islamic faith that the Bengalis of East Bengal, subsequently Bangladesh, have historically practised. Bengalis did not turn away from faith, but they did reject communalism. The social and political forces which turned Bengali Muslims towards secularism is profoundly examined in this work.