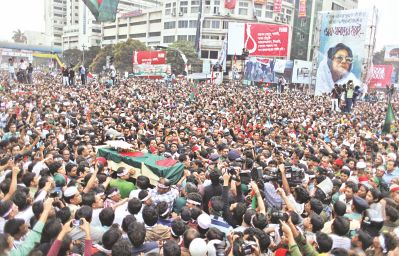 The body of blogger Rajib popularly known as thabababa is taken to Shahbagh yesterday afternoon for namaj-e-janaza. Rajib, an architect and an avid activist of the movement demanding death penalty for war criminals, was murdered in Mirpur Friday night. Photo: STAR

The brutal killing of blogger Ahmed Rajib Haidar has strengthened the Shahbagh protesters' resolve and made them more confident of winning their battle.
"Touching our co-fighter's coffin, we now swear not to return home leaving our demands unfulfilled," Imran H Sarker, one of the key organisers of the movement, said after Rajib's namaz-e-janaza at the venue yesterday.
"The soul of our friend will not rest in peace until the spirit of the Liberation War is upheld, Jamaat and Shibir eliminated and their politics banned," said Imran, also a blogger.
The protesters called upon the nation to fight for the justice for the killing of Rajib, who was found murdered near his house at Pallabi in the capital Friday night.
They termed Rajib a martyr and a freedom fighter of new generation and vowed to carry out his mission which was to see the war criminals hanged.
Prime Minister Sheikh Hasina visited his residence in the capital's Pallabi yesterday afternoon and vowed to bring the murderers to trial.
Meanwhile, through separate statements, Bangladesh Garment Manufacturers and Exporters Association (BGMEA) and International Committee for Democracy in Bangladesh (ICDB) expressed their solidarity with the movement.
Students and teachers of University of Asia Pacific and Institute of Architects, Bangladesh, yesterday joined the movement. Rajib was a student of the university and a member of the institute.
Spearheaded by a group of bloggers and online activists, the demonstration started on February 5, hours after Jamaat leader Abdul Quader Mollah was given life imprisonment in a war crimes case.
The 12th straight day of the demonstration passed with protesters venting outrage at the murder of Rajib, known in the Bangla blog community as Thaba Baba.
Since the morning yesterday, the intersection had been swarming with tens of thousands of people wearing black badges and echoing the demand of the protesters.
While the body arrived at Shahbagh, a shadow of shock engulfed the whole area.
Rajib's first namaz-e-janaza was held at the intersection, now known as Projonmo Chhatra, around 5:50pm yesterday.
Before the janaza, Rajib's uncle Alam said, "The body belong to neither any party nor any individualâ€¦. I have come here to hand over the body to protesters."
The second namaz-e-janaza was held at Palash Nagar in Pallabi around 7:45pm. The third one is scheduled for today at Kapasia Pilot High School in Gazipur.
Shipping Minister Shahjahan Khan, Attorney General Mahbubey Alam, media personality Asaduzzaman Noor, lawmaker Mostafa Jalal Mohiuddin and, relatives of Rajib, among others, attended the janaza.
PM's son Sajeeb Wajed Joy, too, went to the funeral prayer and expressed solidarity with the movement.
Syed Emdaduddin, Dhaka University central mosque imam, administrated the Shahbagh janaza, participated by hundreds of thousands.
After the second janaza, the body was taken to Rajib's Pallabi residence and then to the mortuary of Birdem Hospital.
"Rajib will be laid to rest at his family graveyard at Kapasia in Gazipur tomorrow [today]," Imran H Sarker told The Daily Star last night.
Most of the posts of the online activist were on the Liberation War and Jamaat's activities.
His family members, friends and Shahbagh protesters allege Jamaat-Shibir members had killed Rajib as he was playing a major role in the movement.