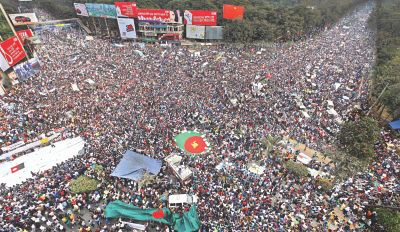 People turned up in droves at the city's Shahbagh intersection yesterday to demand death penalty to all war criminals of 1971. Photo: Rashed Shumon

The nation yesterday saw the biggest gathering in recent memory as tens of thousands thronged the capital's Shahbagh intersection to call for death penalty for the war criminals, including Abdul Quader Mollah, of 1971.
Men and women, boys and girls, young and old -- tens of thousands of them -- from all walks of life filled the few square kilometres area to the brim.
Since the daybreak, people, many with their families, started flocking the intersection first in their hundreds and then in thousands, carrying national flags, banners and placards for the 3:00pm mass rally. By then, the crowd stretched as far as the eye can see.
From Matsya Bhaban in the south to Kataban intersection in the north and from Hotel Ruposhi Bangla intersection in the east to TSC in the west, people were everywhere. Overwhelming was the participation of young generation -- students of schools, college and universities -- the life force of the movement.
In thunderous chants, they made their demand for death sentence to all war criminals and registered their determination to resist Jamaat-e-Islami and Islami Chhatra Shibir.
It was the fourth day of the non-stop protest, which began hours after a war crimes tribunal on Tuesday sentenced Jamaat leader Quader Mollah to life term in prison for crimes against humanity during the Liberation War.
The movement was launched by Bloggers and Online Activist Network, but it soon transformed into a people's movement. Demonstrators say a life sentence for Mollah was too lenient. They want death sentence for him.
Protestors have kept the interaction in their possession since Tuesday afternoon, with several hundreds of them staying overnights without sleep.
From yesterday's rally, people took an oath to continue the movement until their demand is met. In addition to capital punishment to the war criminals, the demonstrators called for banning Jamaat and its student wing, Shibir.
People also vowed to boycott all businesses, banks, media outlets and social and cultural organisations owned by Jamaat leaders.
"We pledge to keep on demanding trial under a special tribunal of those Razakars and Al-Badrs who were convicted and were under trial but freed after 1975," said Imran H Sarkar, administering the oath from a makeshift stage erected atop a truck at the intersection.
Imran, convener of Bloggers and Online Activist Network, is one of the initiators of the movement.
"We pledge that we will continue our movement from Teknaf to Tetulia under the leadership of general people until highest punishment is given to Razakars-Al-Badrs who committed crimes against humanity like genocide and rape in 1971," protestors vowed after Imran.
The mass rally began with the recitation of a poem and rendering of the national anthem.
"This is another 1971," said Mili Rahman, widow of Birshrestha Matiur Rahman.
"Today we are united in voicing our single demand. We freed the country in 1971 and today you will free it once again from Razakars and Jamaat-Shibirâ€¦. None can hold us back," she said.
Noted writer Prof Muhammad Zafar Iqbal said, "I am here to offer my apology to you. I wrote in newspapers that the new generation only hits 'like' on Facebook and writes on blogs, but does not take to the streets. You have proved me wrong, and I thank you all for this."
"The year 2013 has turned into 1971 and those of you who did not see 1971 are now witnessing '71 in the year of 2013," he added.
"Study when it's time to study, write poems when it's time to write poems, listen to music when it's time to listen to music â€¦ and take to the streets when you need to. It is the happiest day of my life. All the martyrs and the country people are thankful to you," he said.
Veteran journalist Kamal Lohani said the whole nation heard the roars of the mass people. "The only punishment to the war criminals, not only Quader but all, is capital punishment. Besides, their politics will also have to be banned."
A number of speakers came down heavily on a section of foreign media for what they called its negative coverage of the war crimes trial and the ongoing movement. Protesters were heard chanting slogans against some foreign media.
Speaking at the rally, Sector Commanders Forum Senior Vice-chairmen Maj Gen (retd) KM Shafiullah said, "It's a rebirth of 1971â€¦.
"We'll have to carry on our movement until our one and only demand is met."
Also spoke on the occasion Dhaka University Vice-chancellor Prof AAMS Arefin Siddique, Jahangirnagar University VC Prof Anwar Hossain, Bangabandhu Sheikh Mujib Medical University VC Prof Pran Gopal Dutta, Hasan Imam, cultural personality and novelist Anisul Haq, Shaon Mahmud, daughter of Shaheed Altaf Mahmud, and Shyamoli Nasreen Chowdhury, widow of Shaheed Dr Alim Chowdhury.
A numerous numbers of socio-cultural and political organisations and professional bodies expressed solidarity with the demonstrators.
Addressing the rally, Hasan Tarek, general secretary of Bangladesh Chhatra Union, demanded cancellation of memberships of Quader Mollah and Kamaruzzaman from the Jatiya Press Club.
Some private university students joined the demonstration wearing black T-shirts and ropes hanging from their necks, demanding capital punishment to all war criminals.
"Either the war criminals will be hanged or we will hang ourselves," said Rezaul Karim, an MBA student of Independent University Bangladesh.
Tania Tun Noor, a BBA student of Dhaka City College, held a placard that read: "Shakunera akhono potaka chhareni," meaning the vultures are still clutching the flag.
"The theme of the placard is that the black hands of Jamaat-Shibir are still clutching our flag and they are trying to take the country backward," she said.
Around 100 children, aged between four and 15, of Khelaghar Dhaka Mohanagar joined the movement, chanting: "Ar kono dabi nai, Razakarder fashi chai," which means "we want nothing except for the capital punishment to the Razakars."