Bangladesh could be 'next China' 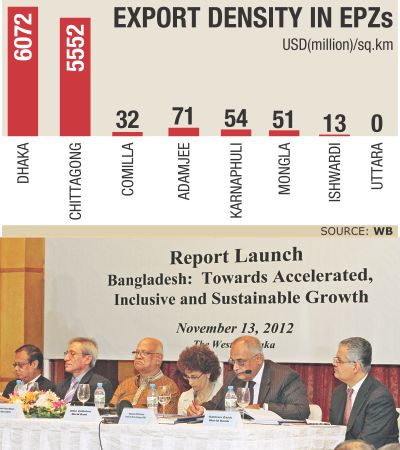 Bangladesh must act soon to take advantage of its low-cost edge to become the "next China" before Dhaka's competitors take the markets the world's second largest economy is leaving, according to the World Bank.
In a report, the lender said Bangladesh can become the alternative to China with its labour-intensive exports growing at double digits if it can address infrastructure bottleneck and take advantage of its large pool of underemployed labour-force.
"If Bangladesh could improve the business environment half way to the level of India's, it could increase its trade by about 38 percent," said the report styled “Bangladesh: Towards Accelerated, Inclusive and Sustainable Growth-Opportunities and Challenges”.
If Bangladesh fails to act soon, others will take the markets China is vacating, it said.
The report, unveiled at the Westin Hotel in Dhaka yesterday, said the average monthly wage in Bangladesh is $43, while it is $61 in Cambodia, $87 in India, $63 to $90 in Vietnam and $150 to $250 in China.
It said Bangladesh's competitors are becoming expensive places. In the next three to four years China's exports of labour-intensive manufactures is projected to decline. It will no longer have one-third of the world market in areas such as garments, textiles, shoes, furniture, toys, electrical goods, car parts, plastic and kitchen wares.
Capturing just 1 percent of China's manufacturing export markets would almost double Bangladesh's manufactured exports, said the WB report.
The WB also stressed expanding the manufacturing activities for exportable products outside Dhaka and Chittagong.
Speaking at the event, Ahsan H Mansur, executive director of Policy Research Institute, Bangladesh, said the country would have to capitalise on its demographic dividend in the next 30 years. "If we fail to cash in on it, it will not come again in the next several millenniums."
The wobbly infrastructure, a lack of good governance and corruption contributed to a flow of less-than-expected investment in the last five years, he said.
Mansur also said the central bank's monetary policies in the last three years have not helped stimulate real investment.
"We saw money flowing to mainly speculative sectors. We have to work hard to woo investment. There is no easy way," he said.
Mansur said Bangladesh should strive for the higher or middle level of the middle-income nation, not the lower level.
Syed Nasim Manzur, managing director of Apex Adelchi Footwear Ltd, said Bangladesh should not chase every country on the planet to bring investment.
He also called for adequate attention to skills development.
The entrepreneur also said Bangladesh needs to have a managed migration policy, as the country also needs skilled workers. There is also scope to send skilled women workers abroad.
Manzur said the country must improve connectivity between the capital and other regions in the country, to help businesses move out of the highly congested city.
Finance Minister AMA Muhith said the government's achievement in sorting out infrastructure deficit has not been as much as they had wanted to have.
"We have substantially reduced electricity and gas deficit. The supply is much better now. Still, there is deficit."
He also said his government has invested in the roads and railway sectors, which were not seen in the decade before the present government came to power over three years ago. "This is a big change."
Muhith said there is also a failure in achieving as much success in the skill development as the government had wanted.
He also said the country's domestic demand could not be undermined. "The domestic demand has been growing. The country is a market of 50 million, which is one-third of the country's total population.
"This is going to be a force."
The minister said Bangladesh has immense potential in achieving higher export growth. "The $26-billion export for an economy like Bangladesh is absolutely unacceptable."
He hopes the country's exports should be about $100 billion in next five years.
Ellen Goldstein, country director of the World Bank, said Bangladesh needs to embark on long-term planning on infrastructure, investment, economic governance and urban management, as the country strives to become a middle income country by 2021.
Goldstein said the country must fix problems regarding Dhaka and to some extent in Chittagong, which is the second largest city in the country.
Goldstein said Bangladesh needs to continue to tap the global migrant market and promote safe migration in order to accelerate growth and reduce poverty at home.
Debapriya Bhattacharya, a distinguished fellow of the Centre for Policy Dialogue, was critical of the WB report for downplaying the importance of the domestic-economy.
"It is exclusively talking about export-led growth," he said, adding that there is an annual market of $44 billion in 2012 for the middle class.
Zahid Hussain, a senior economist of World Bank in Bangladesh, who made a presentation on the report, said skilled labour shortage outside Dhaka and Chittagong is the main impediment to dispersion of economic activities.
He said even targeted incentives have not attracted firms to distant places. As a result, export processing zones in Dhaka and Chittagong have higher export density and employment density than that of the EPZs outside of the two cities.