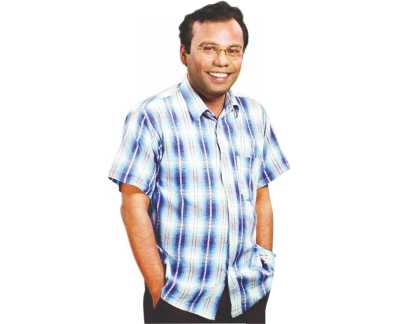 Over the years, Fazlur Rahman Babu has acquired a name as one of the most skilled actors of the country. His hidden talents however, came to the foreground when he sang two songs for the movie “Monpura” -- “Nithua Pathare” and “Shonai Hae Hae”. “Nithua Pathare” was an instant hit, as people all over sang or hummed the tune.
Since then, Babu has had many offers to sing on different occasions. The audio companies and TV channels have not sat idle, encouraging the popular actor to let people know more about his singing skills. Babu says, “I began enjoying listening to music in my childhood. We had a cinema hall nearby where we lived in Khulna. I used to listen to songs from home and learn the tunes. I never took any formal music lesson. All that I've learned, was from listening.”
On singing for “Monpura”, Babu points out that director Giasuddin Selim wanted an unfamiliar voice to do playback for the film. “As Giasuddin Selim was a man of theatre and I had extensive experience of working with him, I gave the nod to his proposal; but I never imagined that the two songs would become so popular.”
Asked on which identity he prefers more, Babu asserts that he is more an actor than a singer. He also urges his admirers to consider him as an actor, not a singer.
Following his playback experience in “Monpura”, the actor has also stood behind the mike for “Ghetuputro Komola”. He has lent his voice to five songs in the last film directed by Humayun Ahmed. Audiences have all praised his singing skills.
However, there is a story behind Babu's playback in “Ghetuputro Komola”. The songs were already recorded by another singer but Humayun Ahmed rejected the takes, claiming that the voice did not suit the sound of the Ghetus. Later, the chief assistant director Jewel Rana and music director Maksud Jamil Mintu proposed Babu as an alternative. After initially recording one song, Humayun Ahmed gave his thumbs up and had the actor sing four more songs.
Babu had already cemented his place in the acting arena, having won the adoration of thousands, along with a National Film Award as recognition for his skills. Asked how he manages to be successful as both actor and singer, Babu answers that singing with a lot of 'dorod' (emotions) is the secret to his vocal skills. He adds that he has also had previous experience of listening to Ghetu songs.
Babu, however, remains busier in acting, with shooting appointments every day. He recently visited Nepal to shoot an Eid special tele-film. Shooting is also complete for Eid dramas “Buno Chaltar Gao” and “Biraler Golae Ghonta Badhibe Ke”.
The actor currently has two running serials on air, “Baga Sher” and “Oloshpur”. He is also doing four new serials for directors of Giasuddin Selim, Al Hazen, KC Paul and Salahuddin Lavlu.
Babu began acting soon after he finished school. He first performed on stage for Boishakhi Natya Goshthi. In 1983, he joined Dhaka's Arannyak Natya Dal, where he stayed for the next 20 years and performed in every single street play during the time.
He also worked with Bangla Theatre on productions like “Lebedef”, “Manush” and “Adim”. His first work for TV was in 1991, in the drama “Mrityu Khudha”.
Asked which TV appearance first put him in the limelight, Babu answers that playing the role of Poran Majhi in Mamunur Rashid's “Itikotha” brought him his first taste of popularity. Many people still call him Poran Majhi, the actor adds.
Along with his works in TV dramas, theatre, street dramas, modelling and singing, Fazlur Rahman Babu has worked in eight films so far. They include “Shopno Danae”, “Bihongo”, “Aha!”, “Britter Baire”, “Monpura” and “Daruchini Dwip”.
Despite his manifold talents, Babu is yet to try his hands at directing or producing dramas. Asked about this, Babu said he prefers to focus on acting, as it attracts him more than direction.
Asked what his long experience has taught him, Babu says, “There is little scope in movies for doing the things I want to do. This is my regret as an artiste. I want to work in more challenging projects and continuously deconstruct myself.”