No polls without caretaker govt 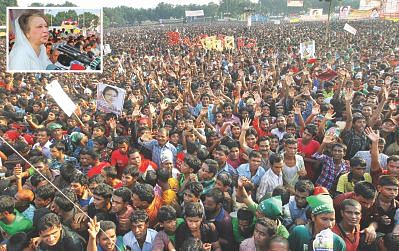 BNP Chairperson Khaleda Zia, inset, addresses a huge rally at Gora Shaheed Maidan in Dinajpur yesterday where she again said the next elections must be held under a non-party caretaker government. Photo: STAR

BNP Chairperson Khaleda Zia yesterday said the next general election must be held under a non-party government and no other formula would work.
"With the people with us, we will create such a situation that the government will have nowhere to escape. No election will be allowed under the present government and incumbent prime minister," she said.
She was addressing a rally at the Gora Shaheed Maidan in Dinajpur. Thousands of leaders, workers and supporters of BNP and its allies attended the rally.
Prime Minister Sheikh Hasina has recently proposed a small cabinet, including opposition representatives, to oversee the next election.
The BNP-led opposition alliance rejected the proposal.
"In 1996 you [the Awami League] did not accept such proposals [election time government comprising government and opposition representatives]. Now we won't accept it. A credible election is not possible under the Awami League," said Khaleda, who started her visits to the district headquarters with the rally.
Khaleda is expected to visit and address public rallies soon at Habiganj, Rajbari and Barisal to drum up support for the restoration of the caretaker government system.
Parliament scrapped the system last year following a Supreme Court verdict.
Urging people to take to the streets when she announces her agitation programmes, Khaleda said, "The Awami League wants to hold the election by staying in power but we will never allow it."
Calling the Awami League-led grand alliance "grand thief", she said the Awami League was a party of fascists and thieves.
"They [the Awami League] are champions of corruption as they have indulged in looting a huge amount of public money… They are infamous for vote rigging too," she claimed.
Criticising the prime minister for the steps taken against Nobel Laureate Prof Muhammad Yunus, Khaleda said the premier had gone out to defame Prof Yunus, who got the prize for his outstanding work in bringing about changes in the rural economy.
On the Padma bridge issue, the former premier claimed, "The World Bank has found the government's involvement in Padma bridge corruption and it decided to cancel the funding. Finally, the government bowed to the World Bank and removed the corrupt people.”
In her 58-minute speech, she blamed Awami League men for looting thousands of crores of taka from the share market. She said no action was taken in the Hall-Mark scam too.
She alleged that the Awami League-led government had gone for quick rental power projects to loot huge sums of state money and kept on increasing power prices.
"The Awami League never wants the development in the country. The prime minister inaugurated the Teesta bridge which was an outcome of the last BNP-led government's efforts. We had approved and ensured funding for the bridge," Khaleda said.
The BNP chief said killings at the border always rise sharply when the Awami League assumes power.
Referring to the disappearance of BNP leader Ilias Ali, she alleged that Ilias was a victim of forced disappearances.
She said such crimes were increasing as the Awami League government was sure of its defeat if the next election was held freely and fairly.
She alleged that educational institutions in the country had been made unstable through political interference.
BNP acting secretary general Mirza Fakhrul Islam Alamgir and standing committee member Lt Gen (retd) Mahbubur Rahman also spoke at the rally. The party's district unit president Lutfar Rahman Mintu presided over the rally.
Earlier, Khaleda Zia offered fateha at the graves of her father, mother and sister at her family graveyard.