Rajuk to raze forests for housing 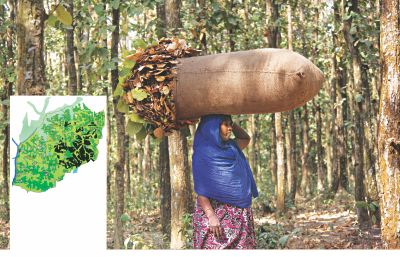 A woman collects dry leaves in Gazipur sal forest in Parabartha village to use them as fuel for cooking. Thousands like her depend on the forest which is now under threat of destruction due to a housing project of Rajuk. Interestingly, a housing and public works ministry letter in 2010 told the PMO that there was no forest there. Inset, the map made by Rajuk consultant Datex shows the land acquired for the scheme. Photo: Sk Enamul Haq

Around 1,300 acres of forest will be wiped out to make way for the Rajuk's Purbachal housing project in Gazipur.
The district administration has already acquired around 1,600 acres of land in five villages under Kaliganj upazila for the scheme that has no environment clearance from the Department of Environment (DoE).
Nearly 10 thousand people, mostly farmers and fishermen, live in the area. For years, they have been preserving sal trees on their private land.
A DoE report in 2010 said the housing project would ruin the area, which is rich in biodiversity. “Most of the acquired land is covered by sal forest. The tree coverage here is better than that in the Bhawal National Park.”
In a letter to Prime Minister's Office (PMO) on September 20, 2010, the housing and public works ministry said, “There is no forest or arable land in the acquired 1,589.8925 acres at Barakau and Parabartha mouja.”
The letter was sent in response to an inquiry by the PMO.
A land survey commissioned to Datex by the Rajuk itself says 42.46 percent of the area is covered by forest, 39.47 percent by cultivable land and 9.75 percent by homesteads. The rest consists of water body, road, playground, commercial area, graveyard and canal.
Talking to this correspondent, some villagers of Barakau, Bashabasi, Parabartha and Kalikut said they were under pressure to move as Rajuk was rushing to implement the project.
They alleged the Rajuk was offering some influential land owners extra compensation for the acquisition to breach the unity among villagers.
Zainal Mian, a farmer of Bashabashi, said the only work he does for a living is growing vegetables and rice on his one-bigha land. “I don't know what to do if I have to give away my land.”
Apart from sal trees, fruit orchards, bamboo groves, sandal and rain trees, mahoganies and also different medicinal plants are found in the villages on the eastern bank of the river Balu.
Kamrul Ahsan Suman, one of the locals, said sal trees grow on their own in the area adjacent to Bhawal Garh. “The villagers have been preserving the sal forest for years.”
The people say they are very much dependent on the forest that has at least 24 varieties of medicinal plants. They collect fodder, edible green leaf and tubers from the woods.
Also, those living in a cluster village work as day labourers in farmland.
Poor people of the five villages would lose their livelihood if the government goes ahead with the project, villagers said.
Asked about the housing scheme, Chief Conservator of Forest Yunus Ali said, he doesn't know of any such move by Rajuk. “If Rajuk really takes such an initiative, we will look into the matter.”
According to villagers, the Gazipur district administration first acquired the land in 1994.
However, following appeals from locals, the then prime minister Sheikh Hasina cancelled the acquisition order in March 2000 through a gazette notification.
Again, the BNP-led alliance government served notices upon the villagers in 2002 informing them of a plan to acquire the land.
Finally, the district administration issued a notice in 2009 saying the land was being reacquired, and asked villagers to receive Tk 1 lakh per bigha in compensation.
Around 6,000 acres of land -- some 1,600 acres in Gazipur and the rest in Narayanganj -- has been acquired for the Purbachal New Town Project of Rajuk.
Asked about the environment clearance, a top official of Rajdhani Unnayan Kartripakkha (Rajuk) preferring anonymity told The Daily Star that they would build the residential area in an “environment friendly” way.
“It was the government that acquired land for the project, not Rajuk. We have to expand the city anyhow. Where would the additional people live?” he said.
“We would preserve some sal forest and also dig a lake there.”
Contacted, Anawar Hossain, the project director, said the deadline to complete the work was June next year. “But it won't be finished on time because of the opposition from locals.”