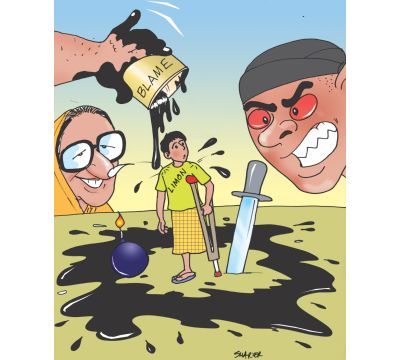 Limon Hossain, a Jhalakathi college student maimed by Rab last year, and his mother have rejected the final report in the attempt-to-murder case filed against the elite force members.
They have also demanded a judicial probe.
Limon's mother Henoara Begum, complainant of the case, yesterday said police were yet to inform her about the final report, which was submitted on Tuesday, the last working day before Eid.
She has decided to file a no-confidence (naraji) petition against the report.
“Such an act by the police just before the Eid festival has dashed all our hopes of a free and fair investigation and justice. It shows how the law enforcement agencies operate with impunity,” she said.
Limon said, “Police submitted charge sheets in two false cases Rab filed against me. On the other hand, in the case filed by my mother, police submitted a false investigation report by concealing the truth to prove Rab innocent.”
He demanded judicial probe in the case to ensure justice.
“My normal life has been completely ruined by the Rab. My hope for a free and fair investigation to bring the liable to book also ends now,” said a disappointed Limon.
Henoara lodged the case with Rajapur Police Station on April 10 last year against six Rab personnel for attempted murder of her son.
In the case statement, Henoara said the accused, without caring to verify Limon's identity, shot him in the leg on March 23 last year while he was bringing cattle back home in Chhaturia village under Rajapur upazila of Jhalakathi.
The Rab team later arrested him.
Limon, who used to work at a brick kiln to pay for his education, had to have his leg amputated from the thigh on March 27.
He secured a six-month bail from the High Court on May 5.
Though the attempted-murder case against the Rab men is having difficulties making any headway, the two cases filed against Limon by the elite force are progressing faster in comparison, say rights bodies.
It proves the bias of the law enforcers to save themselves from the hand of the law, they observe.
The rights groups Ain o Salish Kendra and Bangladesh Legal Aid and Services Trust have demanded a judicial probe, and said they would continue their legal battle until the truth was uncovered.
Influenced by Rab, police had submitted a false investigation report to the court, they added.
Abdul Halim Talukder, sub-inspector of Rajapur Police Station and investigation officer of the case, claimed that the allegations brought against the Rab had not been proved in the investigation as “the complainant failed to provide enough information, witnesses and evidence to substantiate the allegations made in the case”.
He said the victim's father and uncle were made witnesses in the case. But Limon's father was then in Dhaka, uncle in another area and the complainant was at their home during the incident of the shooting.
Limon's mother in the case claimed the Rab personnel intentionally took her son to a place near their home and shot him in the leg, the SI added.
"But the two charge sheets [pressed by the police in the two cases lodged by Rab] and the two other investigation reports [submitted by the police and the administration] mentioned that Limon was injured in a gunfight during an anti-crime operation of Rab,” he said.