Uttam Kumar The Uncrowned King of the Bengali silver screen 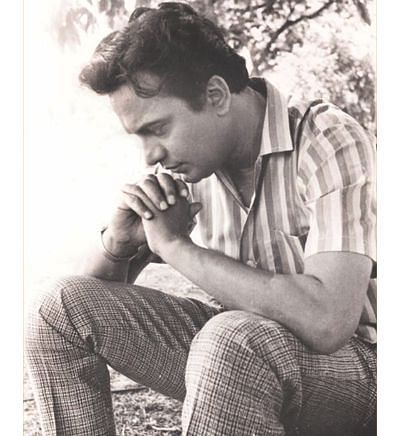 “It is the demise of a leading light of the Bengali film industry…There won't be another hero like him.”
-- Satyajit Ray after Uttam Kumar's death

Uttam Kumar's hypnotic screen presence, mellow voice, unique charisma and dazzling smile made him not just a heartthrob, but also a legend of Bengali Cinema. To generations of Bangla film aficionados, he remains 'Mahanayak' (epic hero), the undisputed king of the Bengali silver screen. Yesterday (July 24) marked his 32nd death anniversary.
Born as Arun Kumar Chatterjee on September 3, 1926 at Ahiritola, North Kolkata, he was called 'Uttam' by his maternal grandmother. The extended family had its own theatre group, 'Suhrid Samaj', which staged many amateur shows within the community. Besides acting, young Uttam was also into sports.
After graduation, the financial condition of his family forced Uttam to take up employment as a clerk at the Port Commissioner's office.
In 1947, he got an offer for a brief role in a Hindi film called “Mayador.” The film never saw the light of day. His first release was the Bengali film “Drishtidaan” (1948), directed by Nitin Bose. In the film Uttam was credited as Arun Kumar. The film was a flop. In 1949 he made his debut as the leading man in the film “Kamona,” crediting him as Uttam Chatterjee. But this too bombed. By then the Industry had labelled him a “flop master.” During this time he got married to Gauri Ganguli (in 1948). Fortunately for Uttam, “Basu Paribar” (1952), co-starring Sabitri Chatterjee, was a big hit.
Uttam delivered another big hit “Sharey Chuattor” in 1953. In the film he was paired for the first time with Suchitra Sen. With “Agniparikkha”, the following year, again hitting the bull's-eye, the Uttam-Suchitra pair ushered in the so-called 'golden era of Bengali cinema'. They went on to become icons of Bengali romantic melodramas for more than twenty years, becoming almost a genre in themselves.
Their films were famous for the soft-focus close ups of the stars, particularly Suchitra's, and lavishly mounted scenes of romance against windswept expanses and richly decorated interiors. The storylines often revolved around a pattern wherein the lovers would meet and fall in love. And then either the family or difference in status of the two would cause hurdles in the romance. Some popular films of the pair include “Shap Mochon” (1955), “Shagorika” (1956), “Harano Shur” (1957), “Shaptopodi” (1961), “Bipasha” (1962) and “Grihadaho” (1967).
“Shonar Horin” (1959) saw Supriya Debi play the lead opposite Uttam Kumar. As they began to act in more films together, the two got involved off screen as well. Many of Uttam's films with Supriya too were huge successes at the box office but there was a marked difference in audience perception to these films as compared to his films with Suchitra.
When Satyajit Ray made “Nayak” (1966), he created the role of actor Arindam Mukherjee, keeping Uttam Kumar in mind. Many people feel the film is autobiographical to Uttam Kumar's own life -- the sense of anxiety and restlessness of the character mirrored Uttam's insecurities about his phenomenal success and abiding fear that his superstardom might not last. Ray later confessed that if Uttam had refused the film, he would have abandoned it. The actor worked with Ray again the following year in “Chiriakhana” (1967).
When the Indian Government instituted the National Awards for Best Actor and Actress in 1967, Uttam Kumar was the first recipient of the Best Actor Award for his performances in “Chiriakhana” and “Anthony Firangee” (1967).
Uttam also tried his hand at Hindi films with the oft-criticised box office bomb “Chhoti Si Mulakat,” a film he produced and starred in, among others that were better received.
A strict workaholic, he was rumoured to have said that his preferred demise would be on the floor of a studio, doing what he loved best, acting. Indeed, that is exactly how he died. While filming “Ogo Bodhu Shundori” in 1980, he died of a massive heart attack at the age of 54.