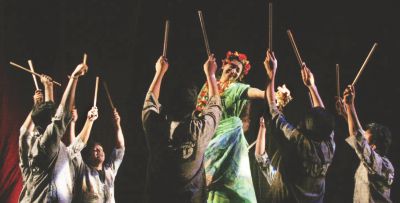 A scene from the play. Photo: Prabir Das

The 100th show of any play is certainly a great achievement and a landmark for a theatre troupe. And if it is a Tagore classic, like “Rakto Karobi”, then the occasion is very special indeed. Tirjak Natya Dal, a leading troupe in the port city, staged the play at Theatre Institute, Chittagong (TIC) auditorium last Friday to a full-house.
Directed by Tirjak chief Ahmed Iqbal Haider, the play was first staged at Studio Theatre, Chittagong in October 1996. A two-daylong cultural festival marked the occasion. Noted author Syed Shamsul Haq and theatre personality Ataur Rahman attended the event as special guests.
Theatre enthusiasts of the city as well as theatre activists of different troupes assembled at the TIC premises on the occasion. Earlier, a vibrant cultural programme and a discussion -- on the theme “Rabindranath-er Rakto Karobi” -- were held. Chaired by sociologist Professor Dr. Anupam Sen, the discussion was addressed, among others, by Syed Shamsul Haq and Ataur Rahman. Haider moderated the event.
The cultural programme featured solo and group performances of Tagore songs, poems and dance.
The programme started with a dance performed by four female dancers from Odissi and Tagore Dance Movement Centre -- to the tune of “Alokero Jharnadhara-e”. The piece was choreographed by Proma Abonti. Another group dance performance by Surangama followed. The composition featured excerpts from Tagore's dance-drama “Chandalika”.
Syed Shamsul Haq, in his speech, said, “The practice of modern theatre in the subcontinent commenced with the staging of Tagore's 'Rakto Karobi'.” According to Haq, Tagore initially called the play “Jakshapuri”, which was later changed to “Nandini”. Eventually, he decided to call it “Rakto Karobi”.
“A subjugated nation perhaps didn't fully understand the deep message in the play,” Haq added, saying, “to be widely understood, the play had to wait till sovereignty of the subcontinent, and one Shambhu Mitra.”
The inner message of the play will remain relevant as long as people remain slaves to mechanism and material wealth, he added.
Ataur Rahman said, “A play can articulate the truth using appropriate symbols and metaphors. 'Rakto Karobi' is the best example of that.” Terming the character Nandini as “the spirit of freedom”, he said, the character, in many aspects, exceeds the spirit of Nora of “A Doll's House” by Ibsen.
Following the discussion and cultural programme, a full-house enjoyed the 100th show of the play.
Through “Rakto Karobi”, Tagore referred to the lust for power and wealth, alongside the untameable spirit of freedom that asks the human soul to go back to nature. In the play, Nandini is a symbol of hope and love in a dark, mechanised world.
Shaila Sharmin enacted the character Nandini, while Bisu and Professor were performed by Sujit Chakraborty and Ripan Barua respectively. Iqbal Haider played three roles -- Raja, Goshai and Moral. Ramiz Ahmed performed two roles -- Fagulal and Palowan. Mahbubul Alam Rajib and Ruksana Karim Mukti enacted the roles Sardar and Chandra respectively.
Lighting by Haider complemented the performances. Naila Azad Nupur designed the costumes.