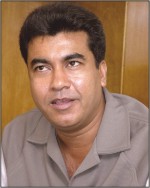 The movie industry in Bangladesh is shocked at the sudden demise of actor S.M. Manna. One of the leading actors of Dhaliwood, Manna, passed away yesterday at the United Hospital in Dhaka. He died of heart attack.
Born in 1964 in Tangail district, Manna acted in over 300 movies. Most of them have done profitable business in an era when the Dhaka-based movie industry faced a drought. Manna's career was initiated in 1984 after he was discovered through a talent search programme by the Film Development Corporation.
Manna was the General Secretary of Bangladesh Film Actors Association. As the General Secretary of the organisation, he had remarkable contribution to the ongoing movement against 'vulgarity' in the Dhaliwood film industry.
Commenting on his sudden death, Managing Director of Bangladesh Film Development Corporation, A.N.M. Badrul Amin said, “He was one of the most popular film actors in the country. His participation in the ongoing movement against the rampant trend of vulgarity in the mainstream Bangladeshi cinema was significant. Manna's demise is a great loss to the whole industry.”
Noted filmmaker Chashi Nazrul Islam said, “We have a shortage of accomplished film actors. This is certainly an irreparable loss.”
Film actor Moushumi said, “We had performed in several popular movies such as Anonto Prem. He was a great actor and a great human being.”
On an average, Manna acted in 10 movies each year. Among films released last year, Manna played lead roles in commercially successful films including Shajghar, Khomotar Garom, Moner Shathey Juddho, Machine-man, Ulta-Palta 69 and Shotru Shotru Khela.
Manna also emerged as a film producer. As a producer, he casted once popular actors who left the movie industry as a protest against vulgarity. Popular actor Razzak said, “Manna encouraged me to work in a film produced by him. The movie is now in production. I don't know what would happen to the film.”
The directors and producers of the 20 films in pipeline, in which Manna had been cast, are seemingly facing uncertainty.
Manna received several prestigious awards including a National Award for Best Actor in 2005.