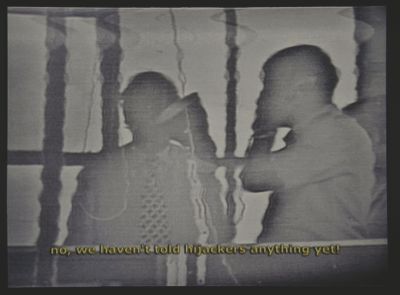 September 28, 1977. An eight year old is eagerly waiting for his favourite TV show -- “The Zoo Gang” [a British spy show] -- to begin. To his dismay, a drama of a different kind unfolded on TV.
Shortly after taking off from Mumbai, Japan Airlines Flight 472 with 156 people on board, was hijacked by the Japanese Red Army. The JRA members, led by Osamu Maruoka, ordered it flown to Dhaka. At Dhaka, the hijackers took the passengers and crew hostage, demanding $6 million and the release of 9 imprisoned JRA members.
Over the next 80 hours, this drama between the hijackers and the Dhaka control tower played out. The eight year old grew up but this episode, the flickering black and white images, perhaps still rerun in his head. Though the circumstances were different, Naeem Mohaiemen's “The Young Man Was (Part 1: United Red Army)”, gave me a similar experience.
Minimal archival footage, more audio and text, accompanied by eerie sound effect in the background, made me feel like a witness and at times a hostage. Hostage because not enough information was provided [I had to do a little research on the JRA, and the hijacking; this has been educational for sure]. The negotiation, often inadvertently, induced chuckles.
As the psychological dance between the hijackers and the Bangladeshi negotiator continued, another drama was brewing on the sidelines. As the Japanese government accepted the hijackers’ demands, some Bangladesh Air Force personnel staged an unsuccessful mutiny, which later led to secret killings. I scratched my head; how did I not know this?
According to the filmmaker, until this incident, BTV used to have four-hour transmission everyday. To provide live coverage, the Japanese Embassy apparently gave BTV necessary equipments. So, in a way this was a landmark for our TV.
When the hijacker [whom the negotiator calls “Dankesu”] acting as the mouthpiece, asks for newspapers, the negotiator tells him “newspapers lie.” Though the remark was made out of sheer desperation and need to appease the jumpy hijackers, as the chief negotiator Air Vice Marshall (Retd) A.G. Mahmud told the audience during a Q&A session, it made me smile. Some allegations are timeless.
About the Japanese Red Army: JRA was a communist militant group founded by Fusako Shigenobu early in 1971 in Lebanon. It sometimes called itself Arab-JRA after the Lod Airport [now Ben Gurion International Airport in Tel Aviv] massacre. The JRA's stated goals were to overthrow the Japanese government and monarchy and to start a world revolution. This group grew notable because its members slaughtered twelve of their own in its training camp.
The film had multiple screenings in Dhaka and one show in Chittagong. The next show is on June 17 [7pm] at Bengal Art Lounge, Gulshan Avenue, Dhaka.
“In the memory hole,” Mohaiemen says, “it is always 1977.” I can see why.