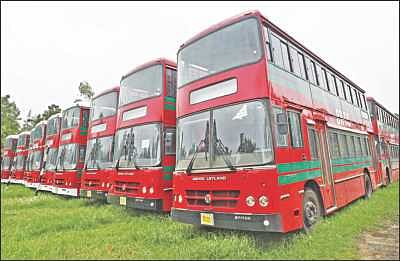 Fifty Indian double-decker buses will hit the city roads Tuesday. This will be the first successful project under India's $1 billion credit agreement inked two years ago.
The new buses started arriving in small lots in the last two months. These could have been seen on the Dhaka streets much earlier, had there been no dilemma over who is going to inaugurate the operations.
Communications ministry officials said they first tried to inaugurate the new bus operation by Indian Finance Minister Pranab Mukherjee, but the plan had to be scrapped after failing to get a spot in his schedule. Later, the ministry sought Prime Minister Sheikh Hasina's presence and finally received her nod for Tuesday morning.
For the inaugural ceremony, two buses will be taken to the Prime Minister's Office (PMO). After that, all the 50 buses would be engaged in different routes in Dhaka and Chittagong.
The buses procured from Ashok Leyland of India have been kept at the Gazipur depot of Bangladesh Road Transport Corporation (BRTC), a state-run body and operator of the buses.
These double-deckers were purchased under a $24 million project of collecting a total of 290 buses in a bid to ease transport crisis in the capital and other parts of the country.
However, urban and transport experts say bringing in new buses would not be fruitful unless the roads are made favourable for those to ply on.
“Dozens of double-decker buses are now on way to Dhaka,” said Iftekhar Ahmed Tipu, chairman of Ifad Group, which got the import contract.
He hoped that all the buses would arrive by September.
The 82-seated buses have 50 standing capacity. Manufactured in Mumbai, these were sent to Bangladesh by road. Ifad Group is the sole agent of Ashok Leyland in Bangladesh.
BRTC has 973 buses, including 109 double-deckers, across the country. Of those, 352 including 105 double-deckers are running in the capital.
The number of buses and minibuses operating in the capital was reduced to 3,000 from about 7,000 two years ago, sources in different transport associations said. This has crippled the transport crisis of the city.
TRAFFIC MANAGEMENT SYSTEM A BAR
Meanwhile, experts say the idea of importing more buses will not help improve the perennial traffic congestion unless there is a proper traffic management and flawless signalling system and the roads are kept free from illegal parking and other occupants.
They said a total of 530 buses were imported from China and South Korea in the last two years. But the effort failed to yield positive result because of the regular traffic jam on the city's limited and mostly narrow roads.
“The existing buses can't make their optimum trips and ferry enough passengers. Adding more buses will never be sustainable and it will rather worsen the situation,” said Prof Shamsul Hoque of civil engineering department at Bangladesh University of Engineering and Technology (Buet).
He said a bus could make four or five trips a day instead of its usual eight trips only for being stuck on the roads for hours.
The situation, according to him, could be improved by increasing capacity of the existing limited road networks and ensuring free run of the buses.
Prof Hoque also reminded the disappointing fate of the buses operated by the BRTC. The expensive Volvo buses became unusable in only seven years whereas those had a lifetime of 20 years, he added.
The communications ministry has plans to import from India 100 single-deckers air-conditioned buses with $6.65 million under the Indian credit, and 50 more articulated or bendy buses, with $5.2 million.