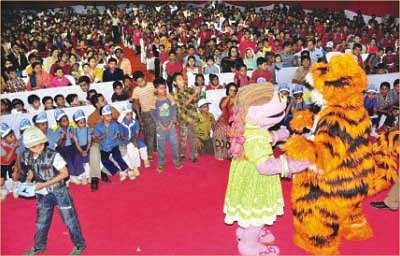 Children enjoy the popular show 'Sisimpur' at the “America Week” organised by the US embassy at MA Aziz Stadium in the port city on January 31.Photo: STAR

The three-day 'America Week-2012' ended here on February 1 that began with a slogan “Moving forward together” at the MA Aziz Stadium on January 30, drawing thousands of people irrespective of age and sex.
Chittagong City Corporation (CCC) Mayor M Manjur Alam and the US Ambassador to Bangladesh Dan Mozena inaugurated the event.
Mozena at a press conference prior to the inaugural ceremony termed the theme of this year's America Week as the guiding principle of America's partnership with Bangladesh. “This partnership is strong and getting stronger,” he said.
The US ambassador said, “We are here to tell the story of America to the good citizens of Chittagong. We are here to tell of America's deepening support for the wondrous people of Bangladesh as they build a peaceful, secure, prosperous, healthy and democratic Bangladesh.”
The US is hosting the America Week in Chittagong for the third time, said Marina Yasmin, chief of press section of the American Centre of the US embassy, adding that the previous ones were held in Chittagong in 2006 and 2002.
More than 60 stalls were set up in the event which are run by US Embassy, USAID and it's development partners and US companies. In a booth of the United States Agency for International Development (USAID), Jilhaz Azam Chowdhury, a senior programme officer of 'Community Based Policing (CBP)', said they participated in the event to apprise the visitors of their activities.
The programme ensures participation of the people in community policing in a bid to thwart crimes at ward level, he said, adding that the community policing forums at ward level play a vital role especially in preventing gender related violence and violation of human rights through joint activities of police and people.
The CBP programme began in January 2011 that engaged 518 community policing forums at village and municipality level, he added.
Amitabh Ghosh, programme manager of 'Promoting Democratic Institutions and Practices (Prodip)', said their programme is designed to improve the effectiveness and transparency of the Parliament. He said Prodip is also increasing the constructive participation of the civil society in the public policy-making and legislative process.
Goutam Biswas, a cluster director of 'Integrated Protected Area Co-Management (IPAC) project,' said the overall IPAC objective is to promote and institutionalise an integrated protected area co-management system for sustainable natural resource management and biodiversity conservation that results in responsible and equitable economic growth and good environmental governance.
“We focus mainly on raising awareness and doing motivational work to save the environment,” he said.
Relief International (RI), a US-based international development agency, is implementing a two-year project designed to enhance the capacity of local communities in Jamalpur district to reduce incidents of human trafficking, with a special emphasis on women and children, and to respond appropriately when trafficking occurs, said RI Programme Officer Naira Nizam.
“Today, we are here to apprise the visitors of our programme,” she said.
Besides these booths, another attraction of the event was the live performance of 'Sisimpur', a popular TV show for kids. The 'Sisimpur' team performed everyday in the three-day event. Significant number of children enjoyed the show everyday.
The America Week was celebrated this year with a special focus on the 40 years of US-Bangladesh diplomatic and development relations.
It featured presentations, outreach events and site visit showcasing the US government-funded programmes in and around Chittagong.
Visitors had opportunities to learn about studying in a US university, the process for applying for US visa and participating in a US government development project.