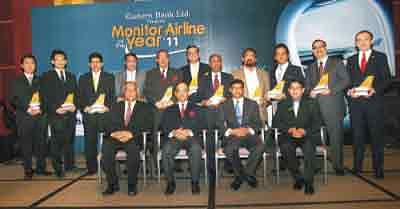 Faruk Khan, civil aviation minister, and Kazi Wahidul Alam, editor of the Bangladesh Monitor, pose with representatives of the winning airlines at an awards ceremony of EBL-Monitor Airline of the Year at the Westin Dhaka yesterday. Photo: Triune

Emirates has been awarded as the best airline, Singapore Airlines the best cargo carrier, Regent Airways the best domestic airline and Dubai voted as the most popular destination by the frequent fliers of Bangladesh.
The frequent fliers opinion poll was conducted by travel trade publication The Bangladesh Monitor and sponsored by Eastern Bank Ltd (EBL).
The airlines received Monitor Airline of the Year 2011 awards at a ceremony held at The Westin Dhaka yesterday.
Civil Aviation and Tourism Minister Faruk Khan presented the awards.
Ali Reza Iftekhar, managing director of EBL, Kazi Wahidul Alam, editor of The Bangladesh Monitor, and Azeem Shah, general manger of The Westin Dhaka and chairman of the jury committee, were also present.
Emirates also won the awards as Best Long-haul Airline, one of the Most Trusted Airlines and for Best In-flight Entertainment.
Singapore Airlines was also awarded in Best Economy Class and Most Trusted Airline categories.
The Best Budget Carrier Award went to Mihin Lanka of Sri Lanka.
Thai Airways was voted as the best Short-haul Airline and for Most Favourite Frequent Flyer programme.
Best Business Class award went to Qatar Airways, and Best in-flight Meal in Business class award to Malaysia Airlines.
Turkish Airline was awarded for Best In-flight Meal and Economy Class and as one of the Most Trusted Airlines.
Etihd Airways and Saudi Arabian Airlines were voted as Most Trusted Airlines.
Dubai was voted as the Most Popular Destination by the Bangladeshi travelers, while Kuala Lumpur and Paris become second and third respectively.
DHL Express received highest votes in the Best Air Express Company Category, while Fedex and TNT Express were second and third in choice among the Bangladeshis.
The Bangladesh Monitor introduced “Airline of the Year” awards in 2007 to judge their service standards and to recognise the airlines for their products and services and to create a healthy competition among them.
EBL, which has been supporting the award since its inception, is the title sponsor of the awards this year. The Westin Dhaka was the hospitality partner.
Almost 2,500 frequent fliers expressed their views on their favourite airlines during the period under review. Most the views were expressed online while an independent group of pollsters collected the opinion of other corporate travelers.
A neutral jury board composed of professionals from different sections of the corporate world perused the data and passed their judgments.
This year the airlines were honored in 15 categories including two new categories -- most trusted airline and best destination.