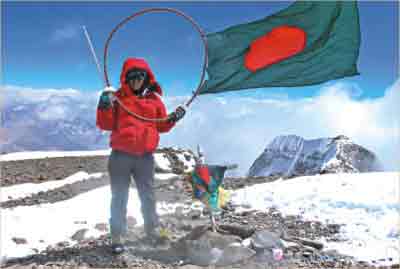 Wasfia Nazreen, the first Bangladeshi attempting to climb the seven highest mountains of the world's seven continents, atop of Mount Aconcagua in Argentina. Photo: Courtesy

Wasfia Nazreen, the first Bangladeshi attempting to climb the seven highest mountains of the world's seven continents, reached the peak of Mount Aconcagua in Argentina on December 16, Bangladesh's Victory Day.
According to Aconcagua Park rangers, this is for the first time that a Bangladeshi climbed the mountain, the highest in the Andes mountain range having a height of 6962 metres and coming in second among the seven summits.
Experienced mountaineers term the Aconcagua a greater physical challenge than the Himalayas or those of the Central Andes Mountain range due to the lack of vegetation and thinner atmosphere, says a press release received here yesterday.
Wasfia, in a BBC Bangla interview on December 19, said the False Polish Glacier route via Plaza Argentina (Vacas Valley) was used instead of the normal route without any fixed ropes or supplemental oxygen.
She dedicated her achievement to the struggle of the martyrs of the War of Liberation in 1971, calling for greater recognition of the contributions of the war heroines.
“There were many logistical and financial hurdles, aside from the actual climbing, and we passed all of them and this proves that anything is possible with the power of positive thinking,” she said.
This leg of the campaign was financed by personal loans.
Wasfia, who began her seven summit campaign on July 3 this year, conquered Mount Kilimanjaro in Africa on October 2 but came back 300 metres away from the peak of Mount Elbrus in Russia on July 12.