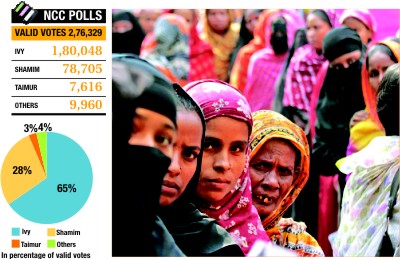 Women line up to cast vote at the Srama Kalyan Kendra in Bandar during the Narayanganj City Corporation polls. The election saw a strong turnout yesterday. Photo: Palash Khan

History has repeated itself in Narayanganj city. Selina Hayat Ivy won the peaceful mayoral polls yesterday, defeating the ruling Awami League-backed candidate Shamim Osman by over one lakh votes.
Her father Ali Ahmed Chunka, a popular labour leader, won the Narayanganj municipality chairman polls in 1974 without the support of his own party, the then ruling AL.
In the prestigious battle of the ballot, Ivy, vice-president of Narayanganj city AL, polled 180,048 votes to Shamim's 78,705 votes.
Though the BNP-backed mayoral candidate Taimur Alam Khandaker had announced a boycott of the polls only hours before voting commenced, he garnered 7,616 votes.
Returning Officer Biswas Lutfur Rahman announced the unofficial results at the polls control room around 1:00am today. He said the voter turnout had been 69.92 percent.
Confident of victory through observing the trends of early results, Ivy in her instant reaction thanked the people for their wholehearted support to her and their contribution to making the polls free and fair.
"Defying fears of violence they came out of their homes and gave their verdict against criminals, extortionists and land-grabbers."
"It's a victory of the people," said an exultant Ivy, who portrayed herself as a "people's candidate" on the campaign trail after her party's central leaders had declined to back her in the vote.
Thirty-seven years ago, AL chief and prime minister Bangabandhu Sheikh Mujibur Rahman picked Khoka Mohiuddin, who suffered a heavy defeat and came third in the electoral race.
This time, Bangabandhu's daughter and ruling AL chief Sheikh Hasina lent her support to Shamim over Ivy at the maiden polls for the newly formed Narayanganj City Corporation.
But the people of Narayanganj had the final say. They sent, according to political analysts, a very significant signal to the political bigwigs.
They stood behind Ivy, who is seen as a candidate with a clean image with a tested career in running city affairs as mayor of Narayanganj municipality. They voiced an emphatic “no” to Shamim, a former AL MP, who is alleged to have deep links with the city's crime ring.
Dr Ivy flew from New Zealand to Narayanganj in 2003 to win the top position of the then municipality by defeating the then ruling BNP-backed candidate. She was re-elected mayor in the polls held in early 2010.
For the last eight years, she administered the municipality with an image of honesty, integrity and transparency. Even her political rivals from the traditionally opposing camp could ever bring any allegations of corruption, nepotism and hooliganism against her.
Like her father Chunka, she is close to the downtrodden sections of society who yesterday honoured her with a landslide victory. Riding on their support, Ivy thus became the first woman mayor in a city corporation.
The polls results also exposed, believe some political analysts, the failure of the ruling AL top brass to read the pulse of the common people in Narayanganj in terms of the kind of leadership and candidates they expect in the future.
AL General Secretary Syed Ashraful Islam has congratulated Ivy on her victory. Also LGRD and cooperatives minister, he said his ministry would extend all-out support to her in running the NCC.
Ashraf said the government had achieved its goals -- making the polls free and fair without deployment of the army and with a successful use of the electronic voting machines.
Narayanganj city AL President Anwar Hossain told The Daily Star last night that Ashraf had offered his congratulations to Ivy through an SMS.
AL-blessed candidate Shamim, meanwhile, questioned the fairness of the polls. He said the voting had been stage-managed in favour of Ivy.
An analysis of the results shows that Ivy had done well even in the areas considered as strongholds of the Osman family.
Three other mayoral candidates fared badly as all of them forfeited their security deposits.
Dispelling fears of violence and intimidation, voters came out of their homes in the morning. The polls were held in a peaceful manner amid the enthusiastic participation of voters.
There was no army to patrol the streets of Narayanganj on election day since the government had already disobliged an Election Commission requisition for military presence in the city. Rumours too had made the rounds over the possibility of a militant attack being launched in the river port township.